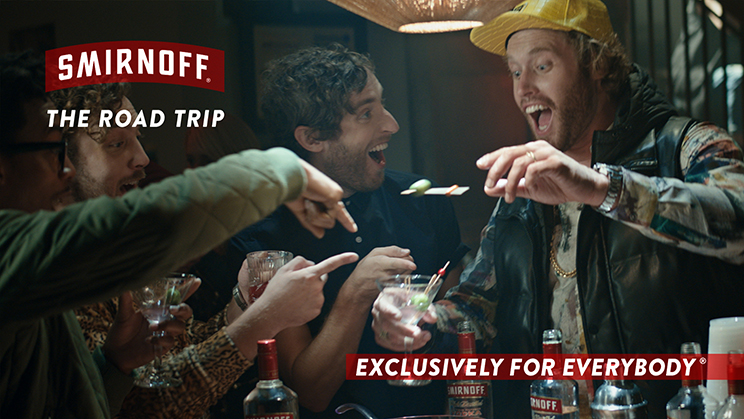 This is funny stuff.

In the latest Exclusively for Everybody campaign for SMIRNOFF®, actors and comedians, T.J. Miller and Thomas Middleditch (HBO’s Silicon Valley), journeyed an epic 3,098-miles from Los Angeles to New York Comic Con in “The Road Trip” to pitch a film idea starring superheroes that aren’t cut from the same Hollywood cloth.

Documenting the adventure, the SMIRNOFF® brand, in partnership with 72andSunny and Arts & Sciences director Matt Lenski, created a series of six broadcast and online films for “The Road Trip,” sharing how T.J. and Thomas learned about the quality of SMIRNOFF® vodka during stops along the way at a comedy club, farm-to-table restaurant, house party, and, finally, in a safe carpool ride.

“Last year, we brought a fresh voice to vodka and broke through some of the pretentious characteristics the category has come to be associated with,” said Brian Radics, SMIRNOFF® Brand Director. “This year we wanted to further heighten that message and seek out moments that are made even better by including everyone. As a brand, we were excited to learn that T.J. and Thomas share our beliefs so much that they would join us to spread the message of inclusivity with everyone.”

True to the films, T.J. and Thomas surprised guests at the kickoff day of New York Comic Con on Thursday, October 8 to shout, via bullhorn, to hundreds of fans that everyone is a superhero. SMIRNOFF® vodka then brought the good times to more than 400 New York Comic Con attendees aged 21+ with a celebration that united all kinds of superheroes together over cocktails and Moscow Mules.

“We went to New York Comic Con to pitch a superhero movie starring us, Emo Boy and my crime-fighting partner, Goldperson, because we believe that every single person has their own super power,” explained Thomas Middleditch. “This was an awesome ending to our road trip in the Exclusively for Everybody campaign as we got the chance to hang out with real fans and heroes at New York Comic Con, celebrate the unique qualities of everyone, use a bullhorn, and enjoy Moscow Mules made from a good quality vodka.”

“It’s time we recognize the superheroes we all are,” stated T.J. Miller, heroically. “We don’t have to be big, muscle clad, unusually handsome, men to be super or heroes! Look at me and how awesomely weird Goldperson looks. This belief that everyone is welcomed in is what Thomas and I love about being involved in the SMIRNOFF® brand’s Exclusively for Everybody campaign, and is something we don’t often see enough anymore.”

The new Exclusively for Everybody campaign, “The Road Trip,” kicked off on October 5, 2015 with the teaser film “3,098 Miles to New York Comic Con” and social content from T.J. and Thomas throughout the week. Highlighting the people, places and spaces that speak to SMIRNOFF® vodka, T.J. and Thomas’ journey is revealed through core films, including “3,098 Miles to New York Comic Con,” “Reminiscing,” “Farm to Table,” “Safe Rides, Sharing Rides,” “What Kind of Night Is It?” and “We’re Here.”

Created by 72andSunny’s New York office, the creative will be brought to life through a fully integrated campaign across broadcast, social, and digital platforms. For more information on the SMIRNOFF® Exclusively for Everybody campaign and the “The Road Trip,” please visit www.smirnoff.com, tune in to www.youtube.com/smirnoffUS or become a fan of the “Most Liked” vodka brand at www.facebook.com/smirnoff. Be sure to check out our DIY cocktail ideas on www.pinterest.com/smirnoffUS.

Full credits are at the bottom of this page.