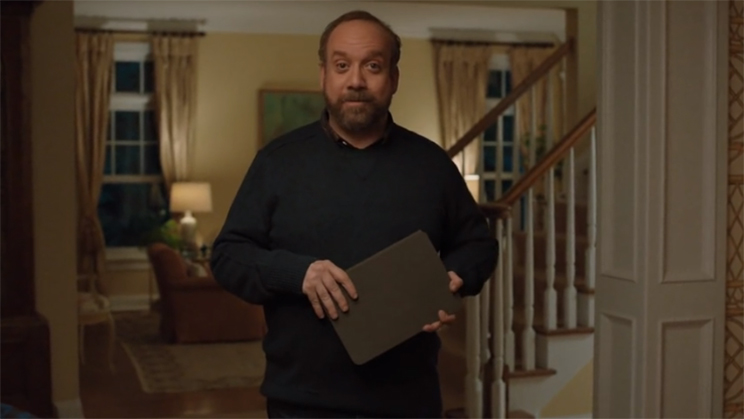 “Movie Titles,” starring Paul Giamatti, aired last night during the Oscars, as part of the “Hollywood Insider” film series for CenturyLink created by Arnold Boston, and directed by Furlined’s Will Speck and Josh Gordon.

CenturyLink’s high-speed broadband service provides access to endless content with its speedy Internet and interactive Prism TV; creating a world where everyone is connected to the things they love – like Hollywood. To show how CenturyLink has enabled its customers to become true critics, the brand has selected Golden Globe and Emmy Award winning actor Paul Giamatti for its new campaign, “Hollywood Insider.” Giamatti, starring in the first on-camera brand commercial work of his illustrious career, faces constant and insightful feedback from an everyday family that has watched countless movies and TV shows and expects perfection from the actor.

CenturyLink sought a celebrity that could amplify their message of simplicity and honesty, while being humorous and personable. Paul Giamatti, best known for his leading roles in American Splendor, Sideways, and Barney’s Version, fits these criteria for CenturyLink, as he appears as an earnest performer hoping to win over a family with his acting chops.

TV campaign, directed by Will Speck and Josh Gordon of Furlined, includes a number of 30 and 60-second spots that air in select markets across the US. “Hollywood Insider” also comes to life in digital and social – through unique longer-format videos that live online and support broadcast efforts, and a series of shorter-format social videos designed to let the family drop some serious “Hollywood Insider” knowledge.