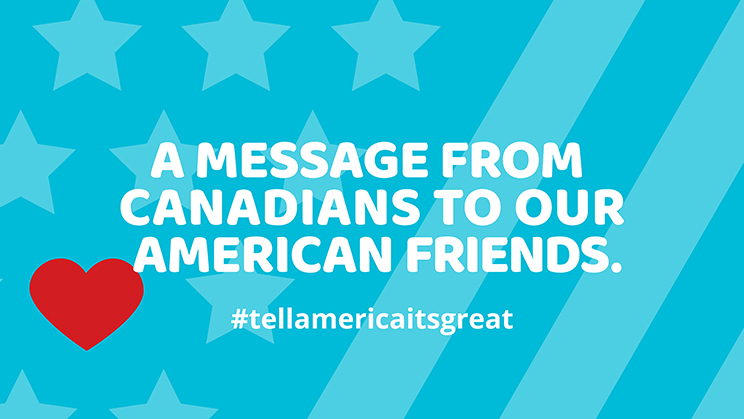 The campaign has almost 2 million social interactions and the campaign video has over 1.4 million views and spawned the response hashtag #TellCanadaThankYou. As a nation, Canada really cares about what’s going on in the US and with all the negativity going around, The Garden got a group of Canadians got together to send some positivity and good news to America, because many Canadians think that America, and Americans, are pretty great.

Your declaration of independence is one of the most beautiful documents ever written. #tellamericaitsgreat

You gave us Buffalo wings, @TheEllenShow, and @GilmoreGirls. Thank you neighbour. #TellAmericaItsGreat

I feel bad for Canada, after they were so nice with their #tellamericaitsgreat campaign, & what did we give them in return? Miley Cyrus.

For those of you looking for a pick-me-up today, just look up- to Canada. #tellamericaitsgreat https://t.co/zlFMvMul16

Canada, #TellAmericaItsGreat is very sweet but instead of tweets can y’all send poutine? We just want to eat our feelings about 2016, tbh.

Thanks, Canada. You’re so nice, even when we’re being unbelievably stupid. #tellamericaitsgreat

Have you seen the #TellAmericaItsGreat campaign? Maybe all that cold weather somehow makes them nicer? https://t.co/AQZp7nHnjH

#TellAmericaItsGreat and #TellCanadaThankyou are trending and it’s the dose of positivity we’ve been so… https://t.co/PWMOsbx0iD

Canada is that perfect sibling you could never live up to, but you can’t hate them cause they’re too nice to you #tellamericaitsgreat

Hi all! Been a while – thought we’d finally show off the #tellamericaitsgreat team. To see what we’re up to next, stay tuned @TheGardenVoice pic.twitter.com/S8ThA2V5DS