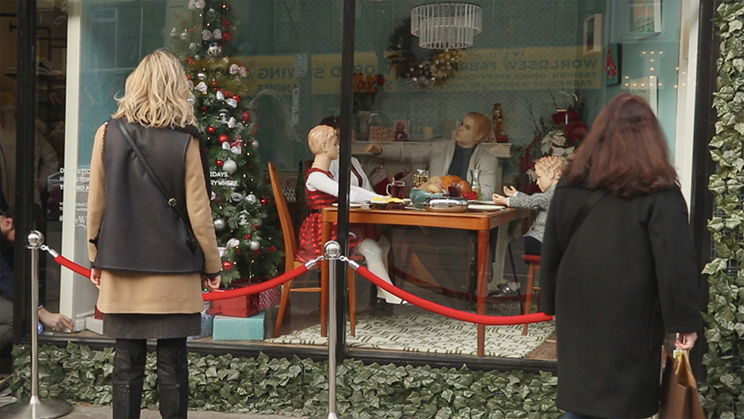 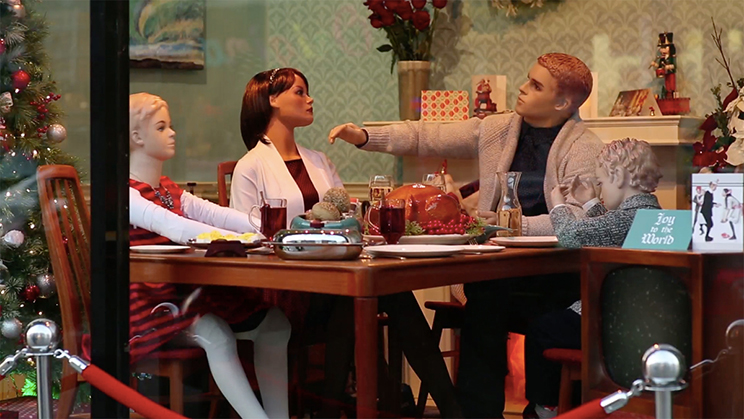 OAITH and Yellow Brick House Launches “The Window Project,”
A Look at Domestic Abuse During the Holidays
New Window Display Shows Holidays are Not Happy for Everyone

Toronto, Dec. 7, 2015 – The holidays, festive and joyous for most, can bring increased stress and fear to women in abusive relationships.

According to numerous studies, domestic violence against women surges during the holiday season, sometimes by as much as 30 percent. One in four women are victims of domestic violence during their lives, says a UN study. And, countless innocent children bare witness to the abuse.

To help illuminate the horrifying realities of violence against women, FCB Toronto teamed with The Ontario Association of Interval & Transition Houses (OAITH), a provincial coalition founded by women’s shelter advocates in 1977 and Yellow Brick House, an OAITH member shelter located in the York region area of North of Toronto that provides a safe place for women and children escaping domestic violence, have launched “The Window Project” to raise awareness and generate funds for women and families impacted in Canada.

“The Window Project,” centers around a window display at the Untitled & Co store, 438 Queen Street West, in the Fashion District area of Toronto, that will illustrate the grim reality some families face during the holiday season in an elaborate holiday-themed window from Dec. 6-13.

At first glance, holiday shoppers will think they stumbled across a festive window. But upon closer inspection, the scene will depict one where a woman and her family are the victims of domestic violence. Viewers are empowered to stop the violence by making an SMS donation to OAITH. This action immediately stops the abuse in the scene for 60 seconds. By raising awareness, the program aims to bring an end to abuse for good.

“The holidays can be a confusing time for women in abusive relationships, especially when there are children involved,” said Charlene Catchpole, chair of the OAITH board of directors. “Many women put on a good face and project an image of stability to keep the holidays a happy time. Our hope is that this campaign will break the lingering culture of silence that exists around violence against women.”
More than 362,000 children witness or experience family violence annually in Canada, according to a study by UNICEF, and in a 2013 study of family violence in Canada, it was reported that nearly 8 in 10 victims of intimate partner violence are female. And, according to Yellow Brick House, during the holidays, transitional shelters average a 30 percent increase in calls for support.

“This effort gives every person the opportunity to personally witness the power one donation can make,” said FCB Toronto Chief Creative Officer Jon Flannery. “While this is only one initiative in the fight against domestic abuse, this effort makes every person a part of the solution.”
Chloe Sam-Mcgrath, design director and co-owner of Untitled & Co, said the immediacy of impacting change was a key draw for her participation. “This groundbreaking initiative makes the issue impossible to ignore,” said Sam-Mcgrath. “If one woman is helped by this effort, it worked.”

The display is being launched on Dec. 6 to coincide with National Day of Remembrance and Action on Violence against Women in Canada. Established in 1991 by the Parliament of Canada, the day marks the anniversary of the 1989 murders of 14 young women at the École Polytechnique in Montréal, also known as the Montreal Massacre. They died because they were women. “The Window Project” display remembers these women with 14 roses in the window.

To learn more about the project to help stop violence against women, please visit OAITH.ca/thewindowproject, or to make a $5 donation, please text “No More” to 45678.

Scroll down for full credits. 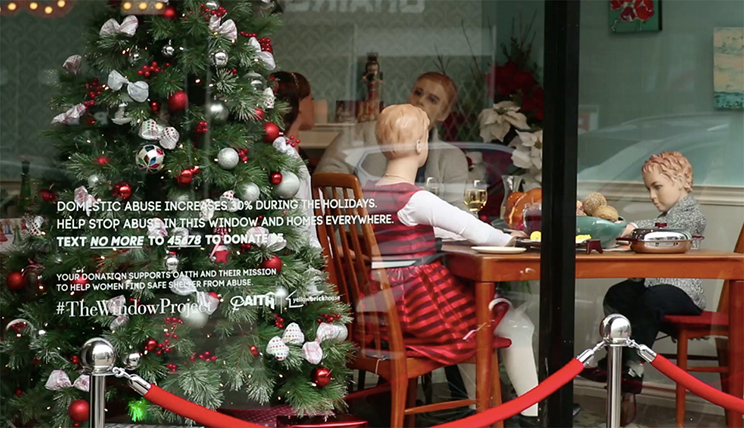 About FCB
FCB (Foote, Cone & Belding) is a global, fully integrated marketing communications company focused on changing consumer behavior for the benefit of clients, colleagues and communities. With more than 8,000 people from 120 offices in 80 countries, the network brings strong understanding of local markets and cultures while continuing a heritage of creativity and success dating from 1873. FCB is part of the Interpublic Group of Companies (NYSE:IPG). Learn more at www.fcb.com or on social media Twitter, Instagram, Facebook, LinkedIn.

About OAITH
The Ontario Association of Interval & Transition Houses (OAITH) is a provincial coalition founded by women’s shelter advocates in 1977. Membership includes first stage emergency shelters for abused women and their children and second-stages housing programs and community-based women’s service organizations. The Association works with member agencies to educate and promote change in all areas that abused women and their children identify as important to their freedom from violence.