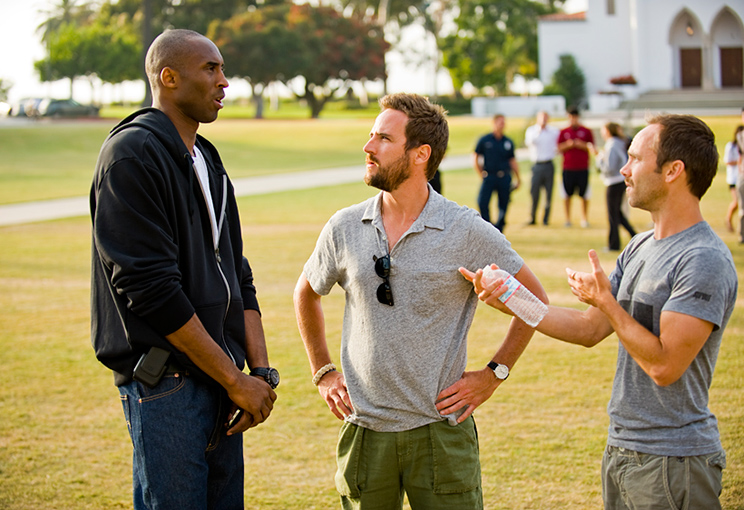 The Hoffman Brothers, Matt on left and Mark on right, are pictured above with Kobe Bryant.

The Hoffman Brothers have joined Community Films for US representation

The Hoffman Brothers’ collaborative approach to crafting commercial films involves a keen eye for visual storytelling and a blend of subtle – and sometimes not so subtle – comedy and dialogue performance, which they consistently deploy in their work with unabashed youthful panache. The pair’s portfolio includes work on a number of memorable, award-winning campaigns for brands including, Southwest Airlines, Capital One, eBay, Chrysler and Stride Gum. The work they’re most recognized for, however, is the “Today Was A Good Day” campaign for Nike Skateboarding, starring Paul Rodriguez Jr., Kobe Bryant and Ice Cube. A cult classic amongst skaters, it has been hailed as one of the most successful viral campaigns Nike has ever produced and garnered the brothers a Gold Clio.

The Hoffman Brothers, Matt on left and Mark on right, are pictured above with Kobe Bryant.

“Matt and Mark are an enormously talented directing team and a perfect fit for Community,” says Carl Swan, Partner and Executive Producer, Community Films. “They are masters of storytelling from comedy to sports to humanity and we couldn’t be happier to have them join the team.”

The commercial directing duo – real-life brothers Mark and Matt Hoffman – officially started working together back in 2006 after creatively collaborating on Nike’s “Joga Bonito” campaign for the 2006 World Cup, which Mark directed. Their most recent work, “Jump Rope” for Nike Skateboarding, landed them two AICP awards, a Bronze Lion at Cannes and a Gold Clio, adding to an already profound awards pedigree. The spot was also selected to be a permanent part of the collection of ads at MOMA.

The Hoffman Brothers have a diverse skill set on from which to draw when crafting their creative work. Mark has a BS in Biology from the College of Wooster and attended film school in Mainz, Germany at the Institut For Mediagestaltung. He is an award winning editor and has collaborated with German TV / Arte, Imaginary Forces, and Motion Theory. Matt has a BA in Theater Performance and Art from Southern Oregon University and has starred in a number of national commercials for Heineken, Bud light, Bud Select, San Peligrino, Honda, Volkswagen, Chevy, Nissan, Comcast, Home Depot, Target, Sprint, Priceline.com.