Count Down Your Days 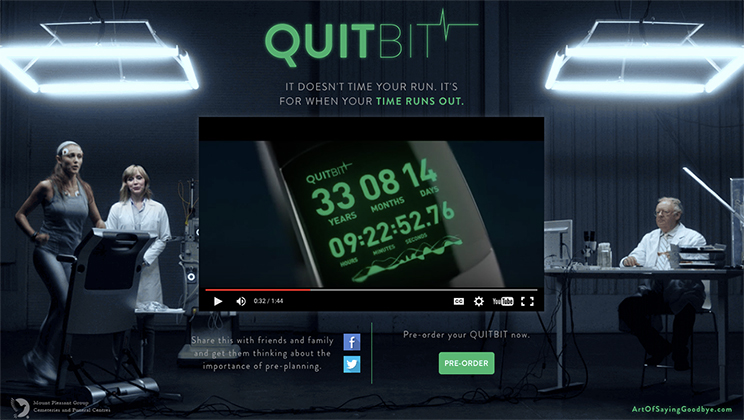 QUITBIT – It doesn’t time your run. It’s for when your time runs out.

How would you like a new wearable that counts down the days you have left in this world?

QUITBIT is designed to take the wearer’s lifestyle habits into account and use that information to calculate how much time they have remaining in their life. Once the user’s time is almost up, it sends a notification alerting the person that it is time to start preparing for their final goodbye.

Of course, the device isn’t real and this technology doesn’t actually exist, but the idea serves to help keep funeral planning top of mind for all demographics, even the younger crowd who may not have ever thought about it.

“We wanted to start the conversation about planning in a new way,” explains Lance Martin, Executive Creative Director and Partner at UNION. “We live in a technology-hungry world so we decided to take one of the oldest services and give it a digital facelift to appeal to every age group.”

Rick Cowan, Assistant Vice-President of Marketing for Mount Pleasant Group echoes that sentiment. “Pre-planning is a conversation that families should be having but many don’t because they park it in the “someday” category. The QUITBIT parody provides a clever way to place the subject of pre-planning in a current and topical arena to help the conversation along.”

Getting consumers to think about funeral planning and even death in general has never been easy so a topic this sensitive had to be approached in a respectful and subtle manner.

“It’s understandable that nobody wants to talk about death,” says UNION President and Partner, Subtej Nijjar. “But funeral planning is one of our most important responsibilities. It just makes sense to bring it to the forefront.”

QUITBIT is also supported by numerous other executions including print, rich media and digital banners, and pre-roll video to drive awareness of how good it is to have a plan. 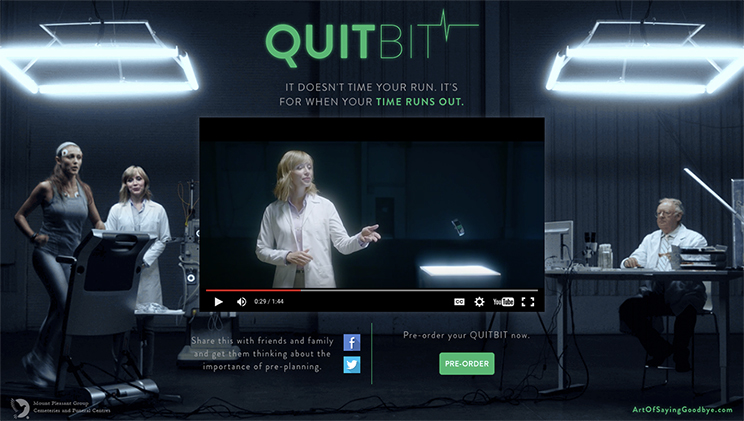