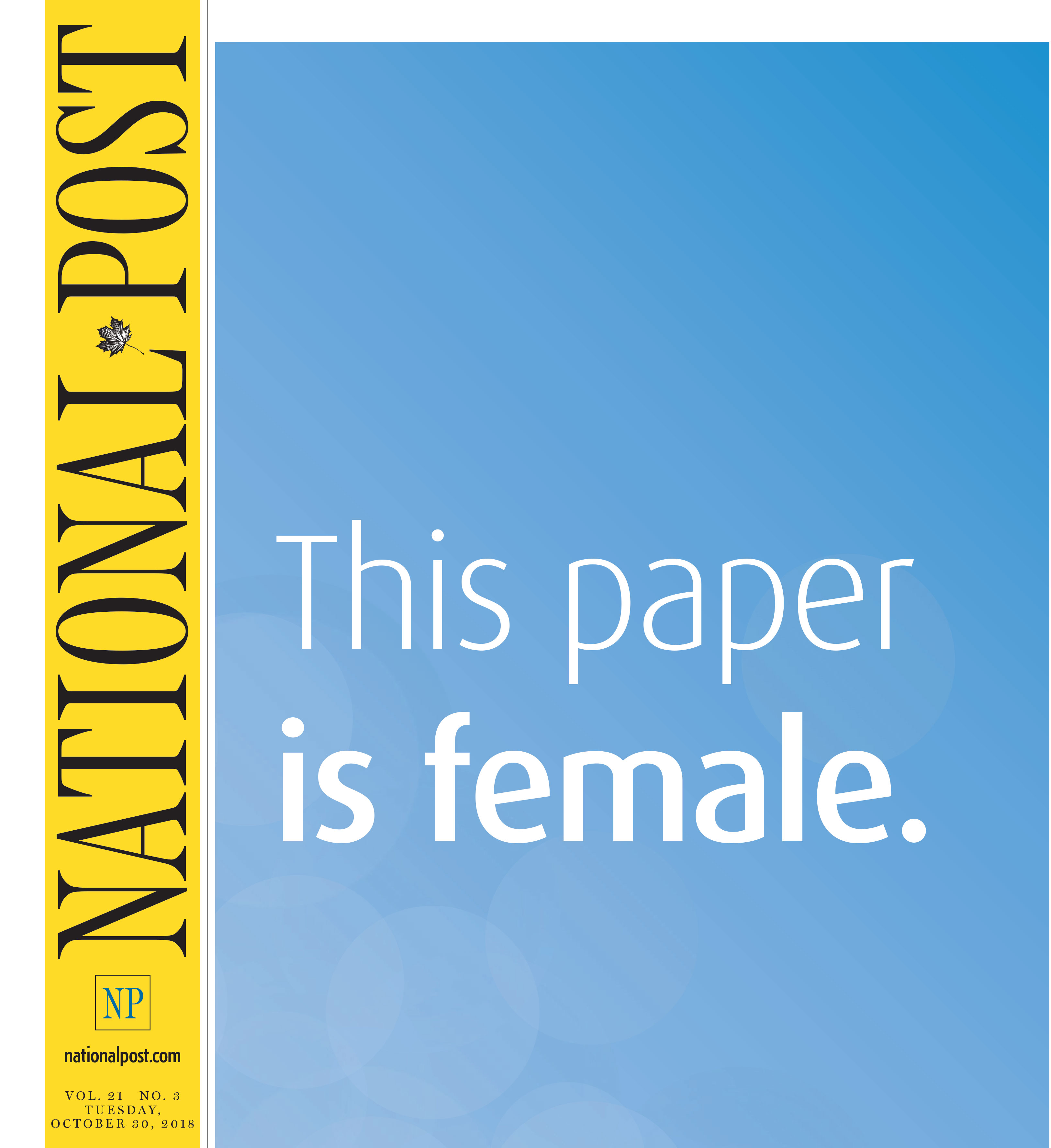 This Newspaper is Female

TORONTO, ON, October 30, 2018 – Scan any daily newspaper’s pages and you’ll see that, on average, only one out of four names mentioned in its pages are female. “She’s Newsworthy,” a new initiative from BMO, created in partnership with the National Post’s content works department and FCB Canada, is aiming to bring about media equality, if just for one day.

On October 30, BMO is taking over a large portion of the national daily that will, by its very existence, create media equality by bringing the stories of unseen female leaders into its pages. The paper will call out the problem with a bold BMO blue cover wrap stating, “This paper is female,” bringing attention to the fact that women are chronically underrepresented in the media.

“At BMO, we see female leaders everywhere, and have the honour of working with and awarding them through our BMO Celebrating Women program,” says Lisa Milburn, Executive Sponsor, BMO for Women and Chief Marketing and Communications Officer, BMO Wealth Management. “By accurately representing female leadership in the ‘She’s Newsworthy’ issue, we can show the next generation of women that female leaders are here, and they are powerful.”

Developed by an all-female creative team at FCB Canada, “She’s Newsworthy” is built around taking over an entire section of the National Post dedicated to women who deserve to be seen in the news. The eight-page spread contains 14 pieces of sponsored content about BMO Celebrating Women Honourees and other exceptional female leaders in Canada, including:

“We’re proud to have this section by BMO included in our paper,” said Anne Marie Owens, Editor-in-Chief of the National Post and the first female editor of a national Canadian newspaper. “It’s symbolically important as a way of highlighting the stories and experiences of successful women.”

The campaign also includes print and digital ads featuring newsworthy women and encourages readers to increase the visibility of women of female leaders who’ve inspired them by sharing why they are newsworthy using the hashtag #BMOforWomen. FCB Canada and BMO are also partnering with leading female influencers, including Christine Margaret Sinclair, captain of the Canadian women’s national soccer team, to further spread the message of empowerment.

“Bold female leaders are present across every industry, including the media, but often don’t receive the credit they deserve because of an unconscious male bias. Girls can’t be the leaders of tomorrow if they can’t see it today,” says Nancy Crimi-Lamanna, Chief Creative Officer at FCB Canada. “We’re hoping to create systemic change, one visible female leader at a time.”

The National Post section is a continuation of BMO’s ongoing program, BMO Celebrating Women, which is dedicated to making female leadership more visible. The program annually honours women who have contributed to local communities among various industries including Innovation and Global Growth, Community and Charitable Giving, and Expansion and Growth in Small Businesses. Since 2012, BMO has honoured more than 100 women in communities across Canada and the U.S.

She’s Newsworthy comes on the heels of BMO’s June 2018 announcement that it would be releasing $3 Billion in capital to women-owned businesses across Canada over the next three years, and its 2014 commitment of $2 billion in credit for female business owners. These efforts follow last year’s BMO for Women campaign that used social video and Google search to highlight female leaders.

For more information, please visit: bmoforwomen.com and join the conversation with #BMOforWomen. 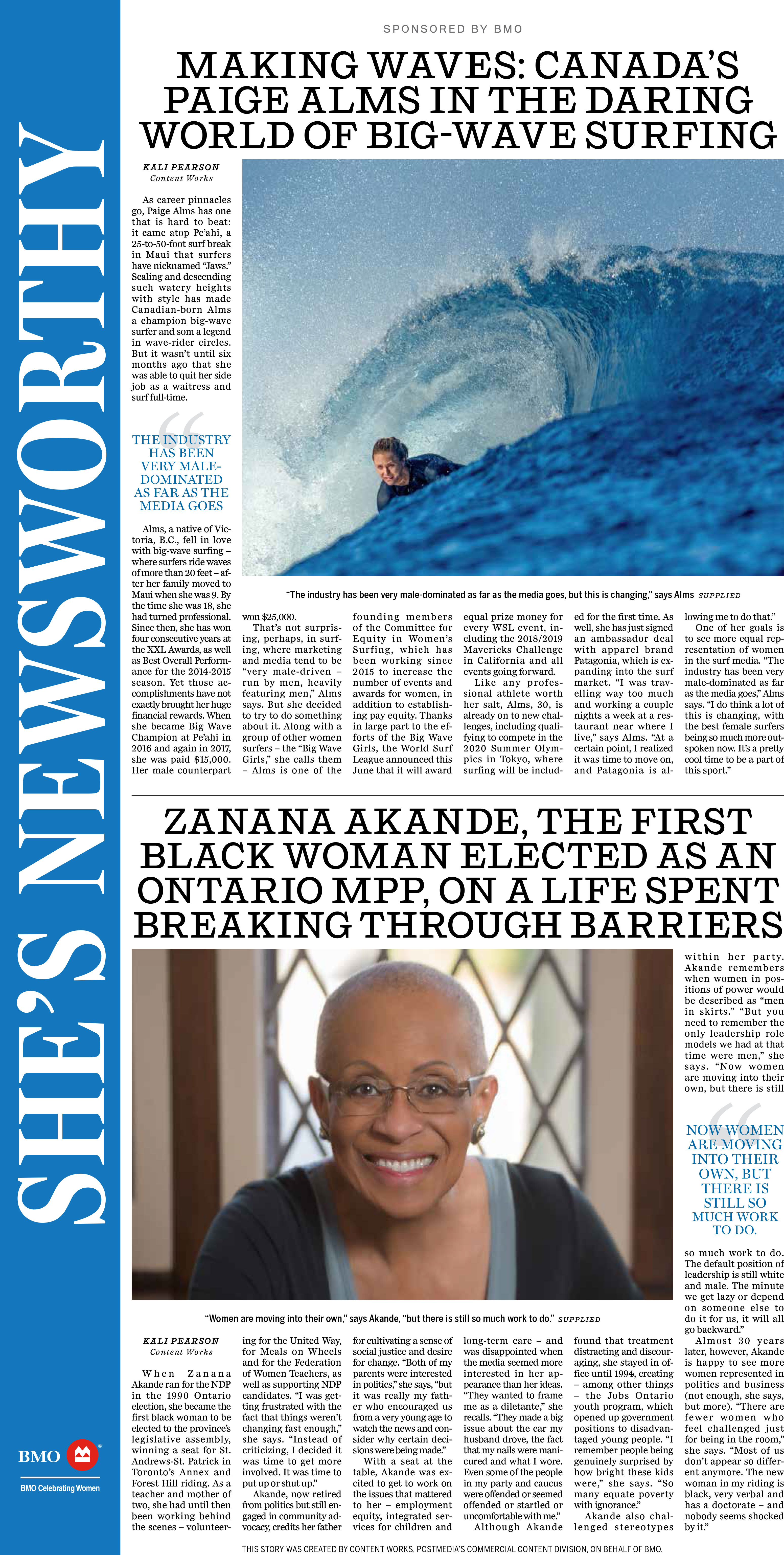 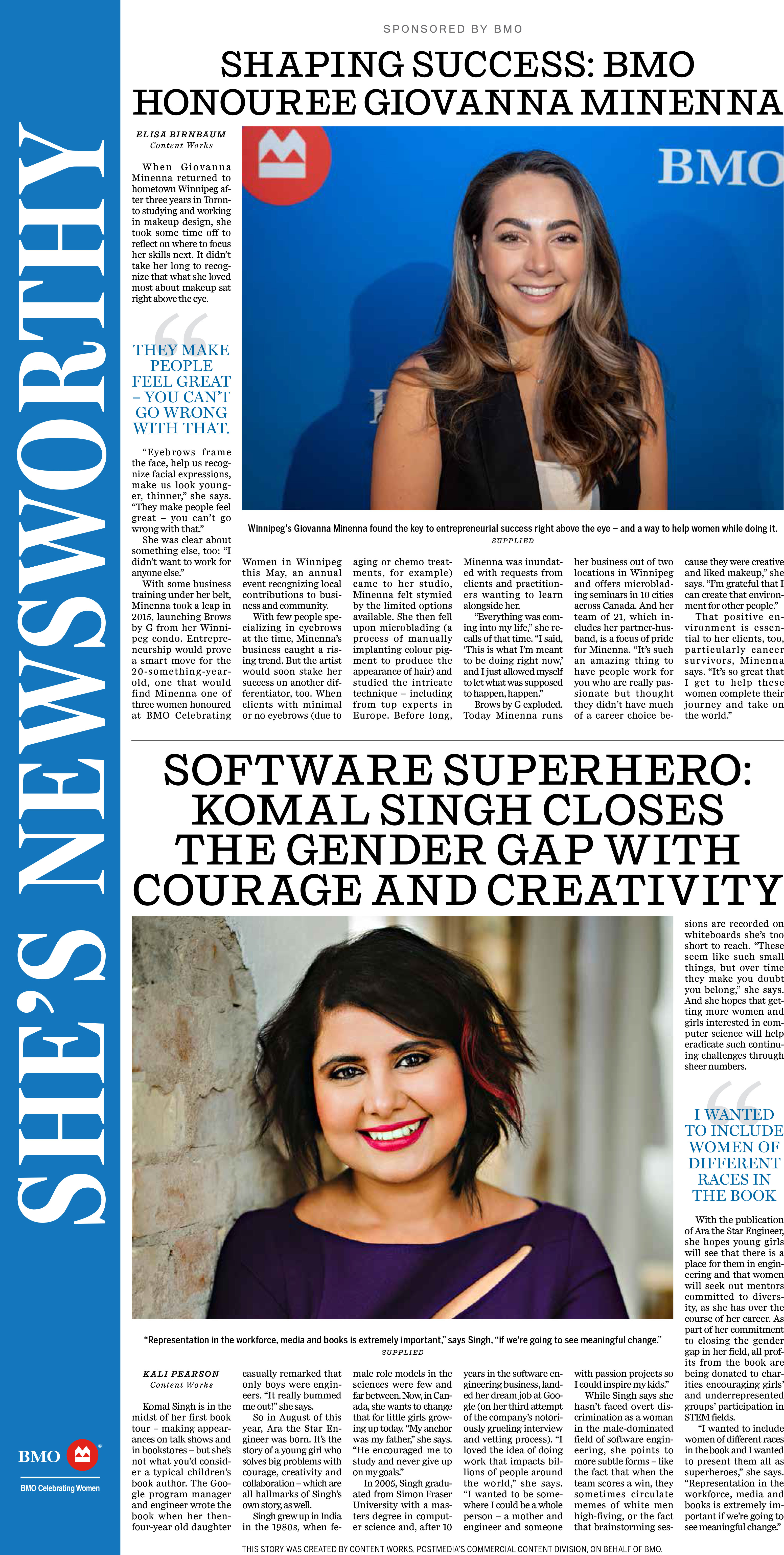 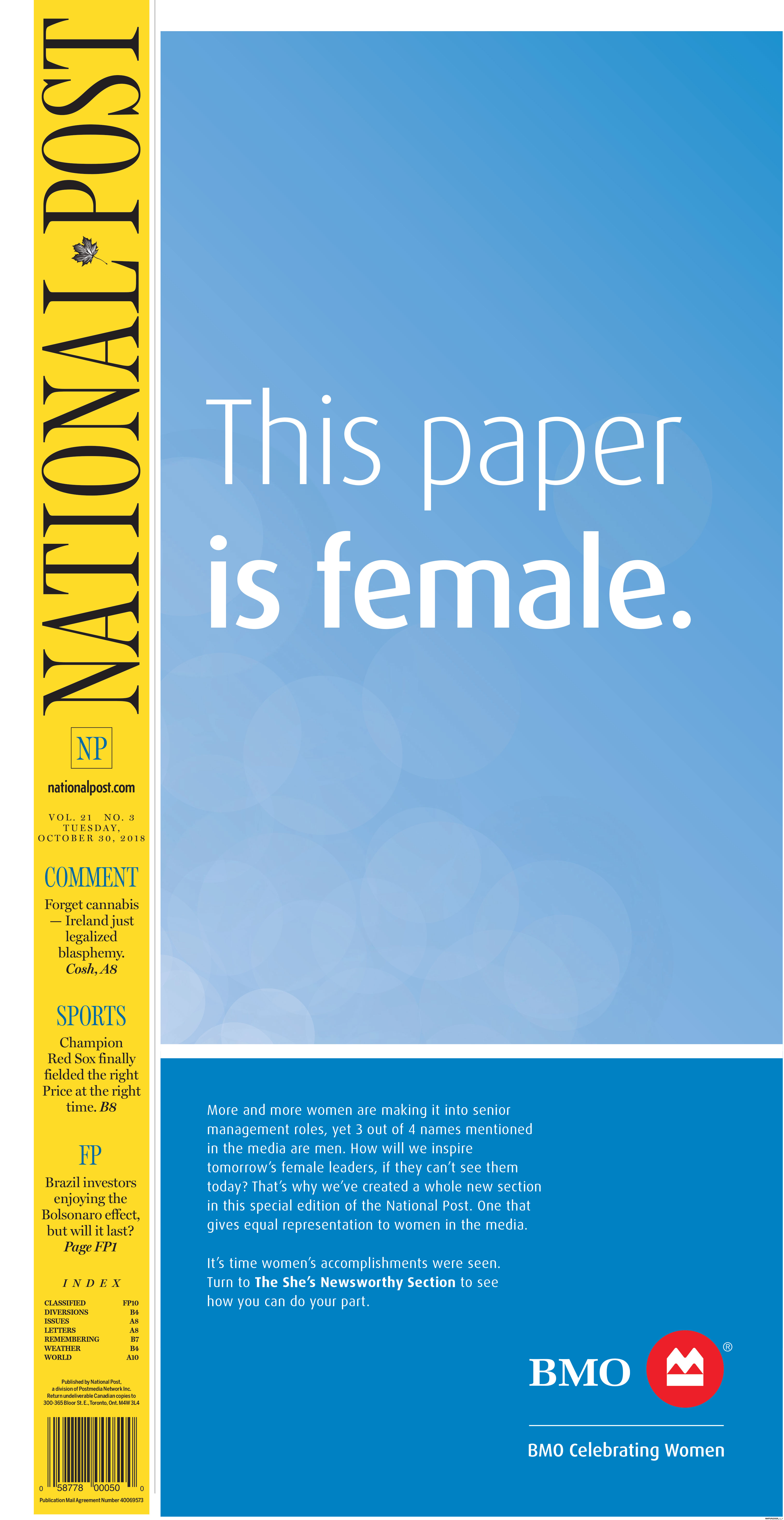 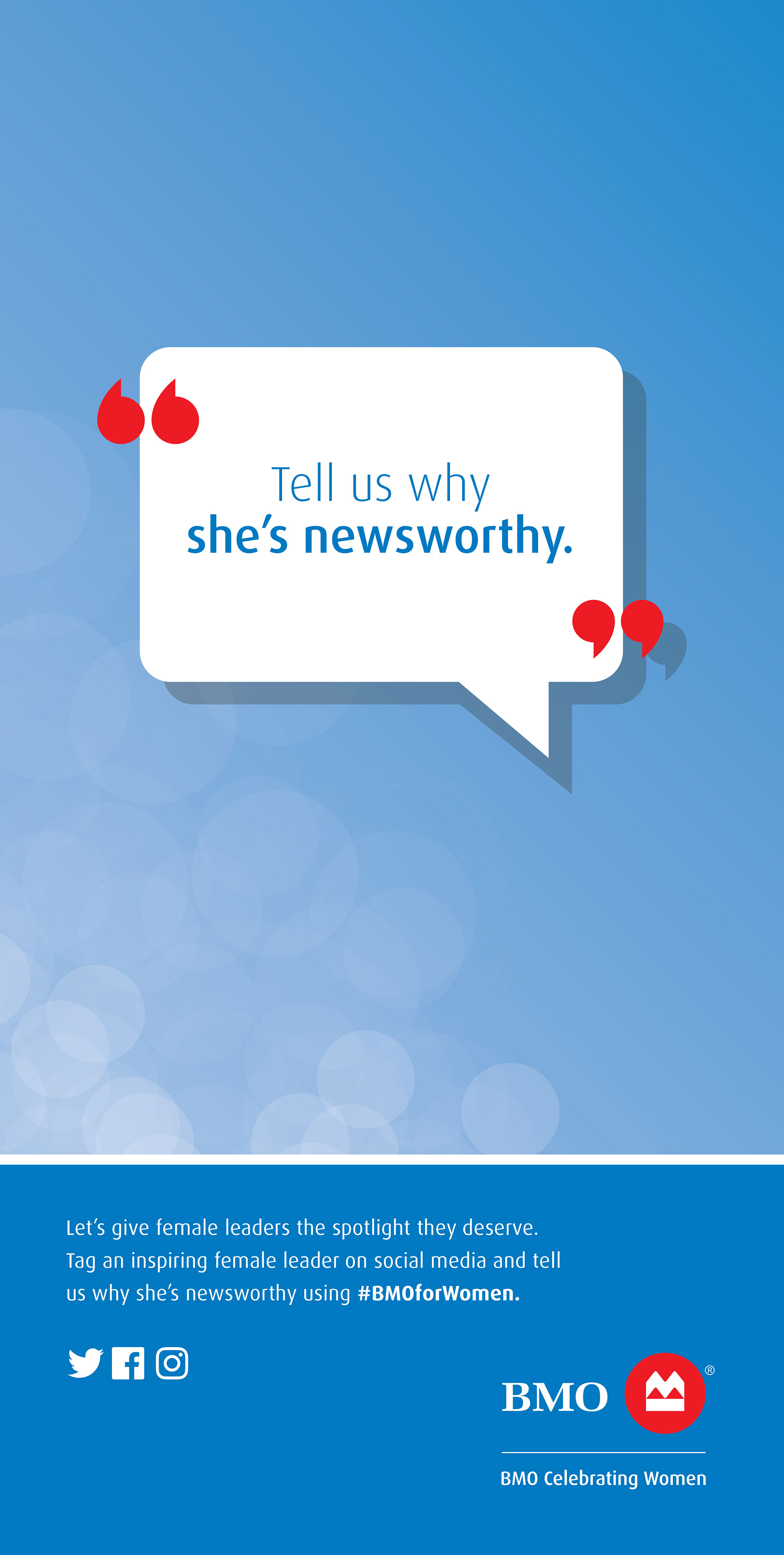