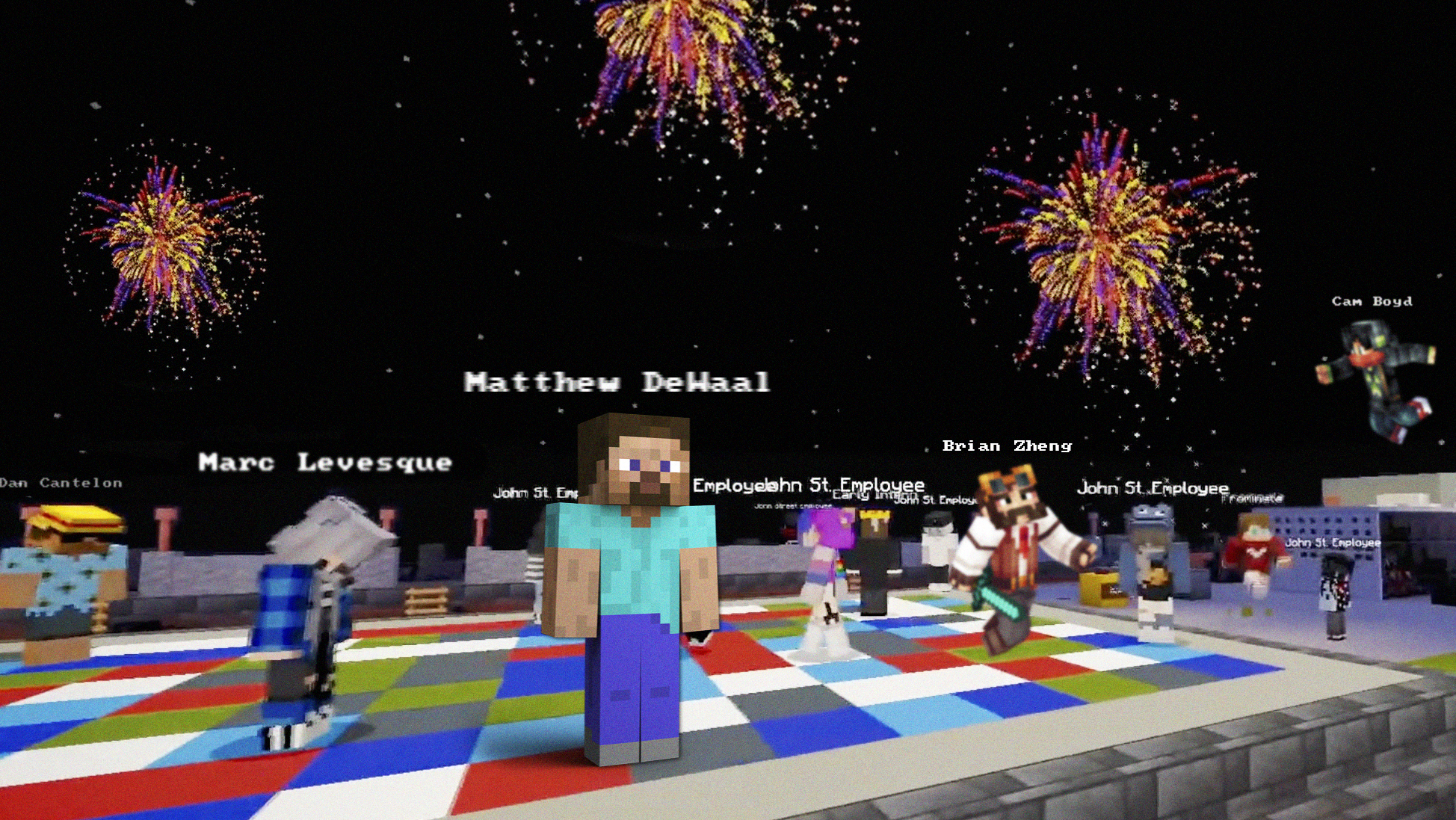 With in-person events not possible, the agency held its 20th birthday celebration inside a virtual recreation of its Toronto office.

The Eiffel Tower. Big Ben. The Great Pyramid of Giza. 172 John St. What do these structures have in common? Well, they have all been recreated in painstaking detail in the massively popular world-building game Minecraft.

And with large get-togethers still discouraged, this Minecraft site also became the site of a virtual hang to mark the agency’s milestone anniversary. Yes, they had an office party in Minecraft.

“Our location has been very important to us – we’re named john st. after all,” said CEO Stephanie Hurst. “The experiences we’ve shared here – from sneaking chocolates from the reception desk to the random pigeons who like to visit the first floor – have helped form who we are over the past 20 years.”

The virtual recreation was made by Gamefruitpulp, a Toronto gamer and YouTuber who spent several years creating the ambitious Building Toronto Project, a 1:1 recreation of the city within Minecraft that includes instantly recognizable recreations of well-known buildings such as the Fairmont Royal York Hotel and the Flatiron Building.

Agency leaders kept the Minecraft version of john st. under wraps until July 23 (the agency’s official opening date), when it opened its doors for a virtual get-together to celebrate the agency’s milestone anniversary. For some staff members who were hired during the pandemic, it was their first time seeing the agency “in person.”

The online space was unveiled during the Friday Breakfast all-staff meeting and staff were then given the day to explore the space and explore various quests in teams.

The experience began with a tour of a retrospective Hall of Fame of previous john st. work outside the building. john st.’ers were welcomed to the space by the agency’s beloved and long-serving receptionist, who jokingly reminded them to fill out their timesheets before sending them on quests that included putting out fires in the production department, picking up strategy department buzzwords, and finding hidden Easter eggs based on inside jokes and moments only someone who worked at john st. would know. All before making their way to a rooftop party, complete with dance floor, fireworks, bar and agency alumni.

“john st. and the people who have made this agency what it is deserved a big celebration,” said Chief Creative Officer, Cher Campbell. “That’s why we had to find a way to be together when we couldn’t do it in-person and, most importantly, why we had to make it fun. A 20th anniversary is a big deal, but we as john st.’ers have never taken ourselves too seriously.”

“I’ve spent a lot of time recreating iconic Toronto buildings over the past few years, but this was my very first advertising agency,” said Gamefruitpulp. “It’s the perfect addition to the online version of Toronto that I’ve spent so many years completing.”

The culmination of the day brought the agency together to watch a Twitch live-casted walkthrough of the space, with ongoing commentary from john st.’s resident gaming expert. The building will remain in Gamefruitpulp’s Toronto cityscape, with the exterior exploration remaining open to anyone with a Minecraft Java account for several months.