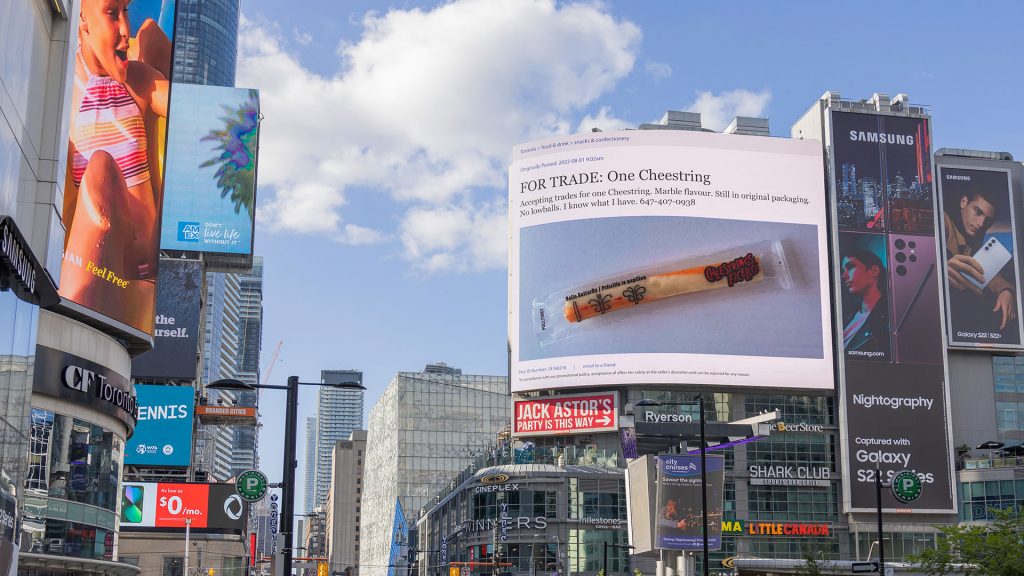 Someone Bought a Huge Billboard to Sell a Cheestring

The stunt, created for Cheestrings by Toronto agency Broken Heart Love Affair, has so far resulted in over 1,000 serious (and not so serious) offers, and 213M (and counting) earned media impressions.

On Tuesday, Aug 2 a giant billboard selling a single Cheestring went up at Toronto’s Yonge-Dundas Square. Yeah, a Cheestring.
The ad read:

FOR TRADE: One Cheestring
Accepting trades for one Cheestring. Marble flavour. Still in original packaging.
No lowballs. I know what I have. 647-407-0938

The billboard was up for three days and has so far received over 1,000 offers (and counting) ranging from the serious to the ridiculous—including two Persian cats, a broken lawnmower, Shaquille O’Neal Rookie Cards, someone’s pregnant girlfriend, a golden gorilla statue, and a yacht.

The news media took notice, and media coverage started to come in from outlets including Narcity, CityTV, New York Post, Breakfast Television, Global News and HuffPost. The phone number on the ad directs to an actor, Joey Harlem, hired to play the role of a 48-year-old professional trader named Angel Domingo. One New York-based radio station even offered Mr. Domingo his own show as a trade.

The stunt is part of “Keep it Cheesy”, a new campaign created for Black Diamond Cheestrings by Toronto-based agency Broken Heart Love Affair that taps into the brand’s fun and playful nature.

“We all remember trading snacks like Cheestrings at school when we were kids,” says Jordan Hamer, Creative Director, Broken Heart Love Affair. “We wanted the billboard stunt to help adults remember their fun side.”

The “Keep it Cheesy” campaign is supported by a TV spot (posted below), OLV, a social campaign and OOH. The TV spot, “Lunch Trade,” uses the insight that Cheestrings make every day more playful. It features office workers all trying to one-up each other on a trade for a Cheestring, with offers including pirate’s treasure, a cloning machine, and a (**spoiler alert**) finale offer of Cthulhu the World Eater.

The work is built around the insight that every peel of a Cheestring brings out the kid in everyone, and trading lunchtime snacks is a quintessential childhood activity.

“We’ve maintained the magic of the brand that captured our hearts nearly three decades ago. Cheestrings are fun. They represent happiness and silliness, and each peel is really an invitation for play. It gives us permission to bring out the kid in everyone,” said Larez. “This is just the beginning of a transformational brand platform that will live on for years to come.”

About Broken Heart Love Affair
Broken Heart Love Affair is a global agency based in Toronto and the partnership of industry veterans Jason Chaney, Carlos Moreno, Denise Rossetto, Todd Mackie, and Beverley Hammond. The agency, named AdAge Silver Newcomer Agency in 2021 and Strategy Small Agency of the Year Silver, is focused on gathering the most decorated strategic and creative talent on a mission to bring back the love for brands, clients, and the creative community. The agency celebrated a Cannes Lion and recognition at every major award show in its first year. brokenheartloveaffair.com