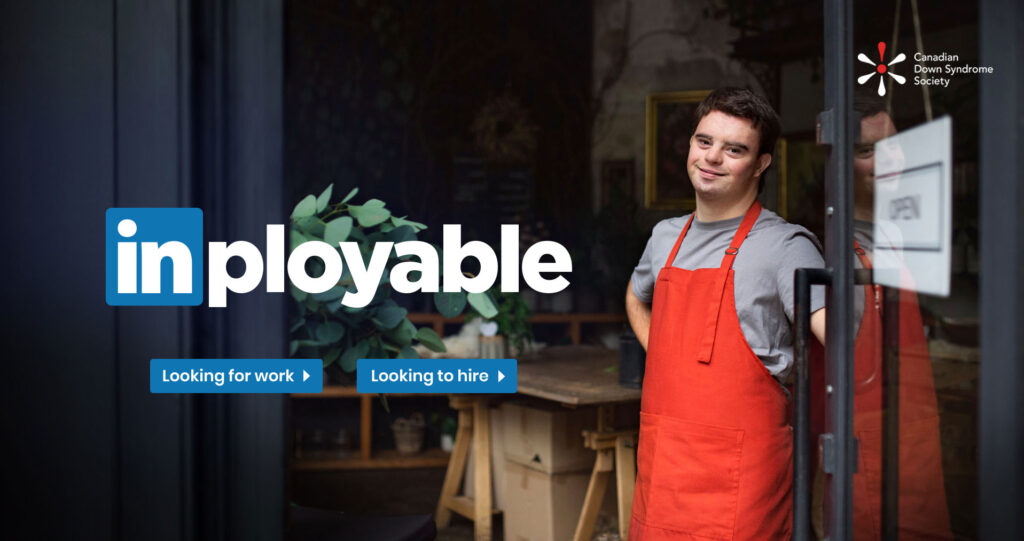 The Canadian Down Syndrome Society launches Inployable, the first employment resource for people with Down syndrome on LinkedIn

The Canadian Down Syndrome Society (CDSS) launches a solution to the labour shortage: A first-of-its-kind online employment initiative that evens the playing field for people with Down syndrome.

In the midst of a labour shortage, the Canadian Down Syndrome Society (CDSS) launches a solution: Inployable, the world’s first online employment network for people with Down syndrome.

North America is experiencing an unprecedented labour shortage. With millions of jobs vacant, employers are struggling to find qualified candidates to fill these roles. A solution that has been long overlooked is the Down syndrome community. Over 50% of people with Down syndrome struggle to find paid work, as they’ve been wrongfully perceived as less capable and less valuable within the workforce. An additional barrier to employment is connection: If employers do have interest in hiring someone with Down syndrome, there’s currently nowhere to connect with them.

Working with its long-standing partner, FCB Canada and CDSS created Inployable, a recruitment community on LinkedIn to make discovering and hiring people with Down syndrome easier.

The community will also feature key resources for prospective employers, such as FAQs and additional guides to help them in creating inclusive hiring and training processes.

Inployable solves two key barriers for employers. First, it directly connects them with ready-to-work individuals with Down syndrome, and second, it provides them with resources to close the information gap on hiring them.

When creating a profile for the Inployable community, individuals with Down syndrome have the option to connect with a Canadian LinkedIn Coach, to assist them with the set-up process. The coach can help with profile setup, adding new, relevant skills like punctuality, low absenteeism, meticulous attention to detail, organizing inventory skills, loyalty, to their LinkedIn profiles and teach the individual how to properly use the platform.

In addition to helping address employee shortages, hiring people with Down syndrome has been proven to have positive impacts on all levels of an organization—including client and customer satisfaction, workplace culture, staff morale, and more. There are also numerous proven benefits at the individual level, such as lower turnover and absenteeism rates, as well as increased motivation, and attention to detail.

The bold “I’m Inployable” video that accompanies the launch stars individuals with Down syndrome sharing their thoughts on how the current hiring system values their resumes: overlooked, underrepresented, and not worth the paper they’re printed on. They want to work, and they want to be seen as valuable contributing members of the workforce. They demonstrate their displeasure with the help of chainsaws, liquid nitrogen, and a wood chipper, making way for a new and better way of hiring — Inployable.

The launch film is being supported by hyper-targeted videos featuring members of the Down syndrome community speaking directly to specific North American companies within sectors most in need of staff. There is a supporting media buy to amplify awareness amongst business owners and HR personnel across North America.

The launch of Inployable is a call to action for the Down syndrome community to join the community and add their profiles to provide a rich resource for employers to find recruits and to post their open roles.

“This year we wanted to portray the Down syndrome community in a different light, to let companies know that there is an untapped community ready to get to work,” adds Andrew MacPhee, Executive Creative Director, FCB Canada, “The Inployable campaign is about providing the community with independence through equal access to jobs and employers.”

Strategy and creative were handled by FCB Canada, with production by Suneeva, editing by Married to Giants, visual effects by Wingman VFX, audio by Grayson, and media by Initiative.