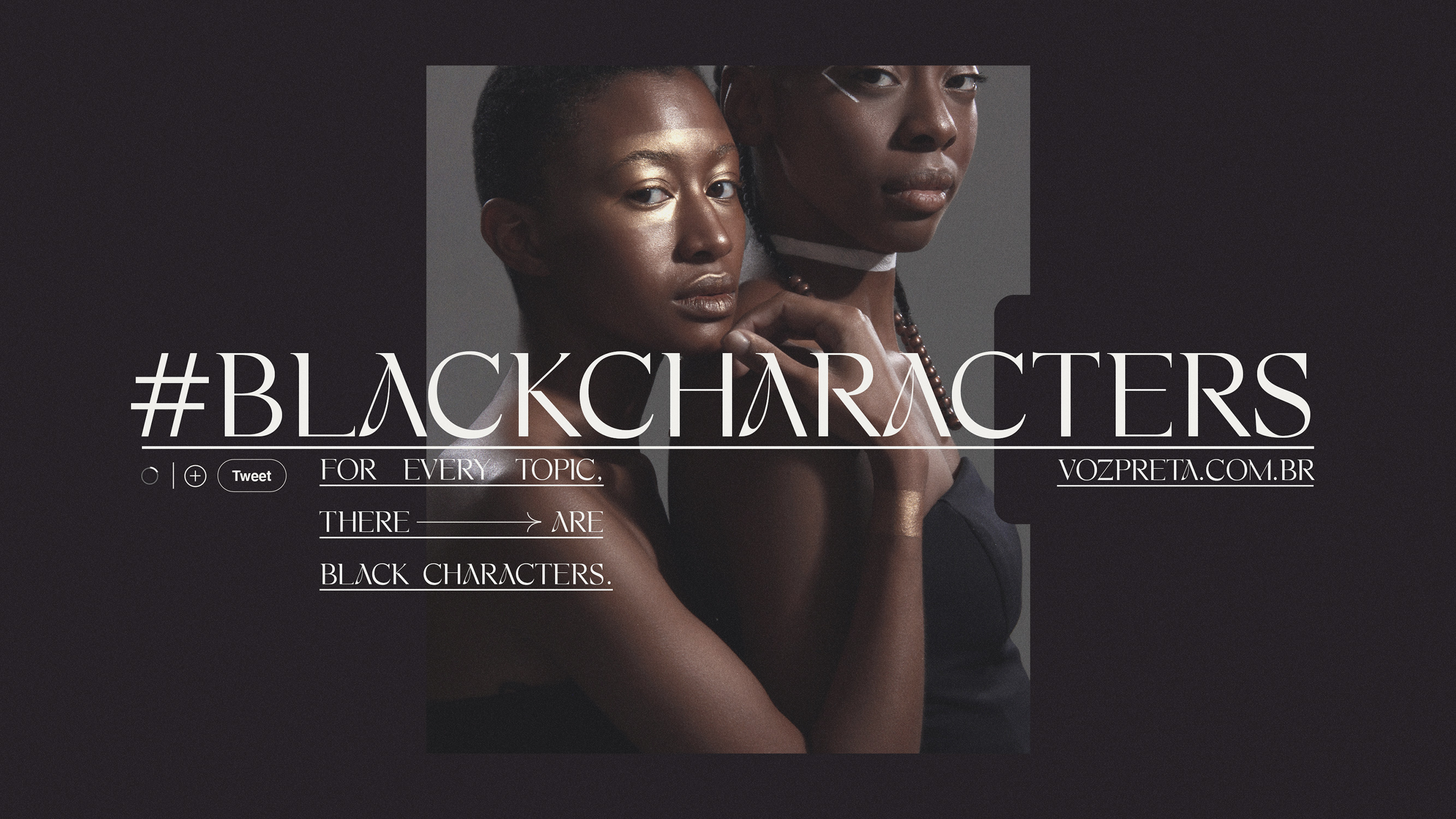 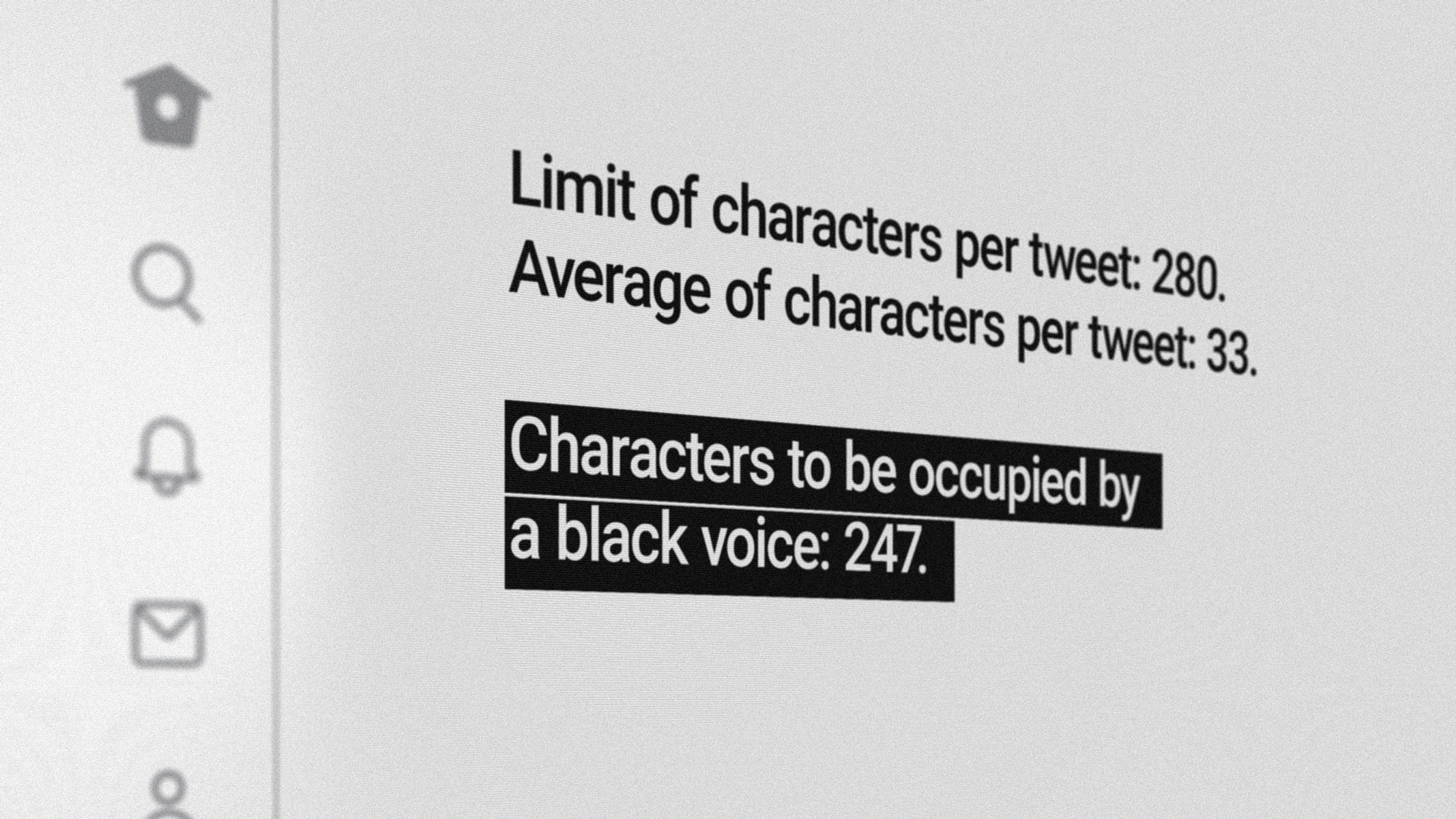 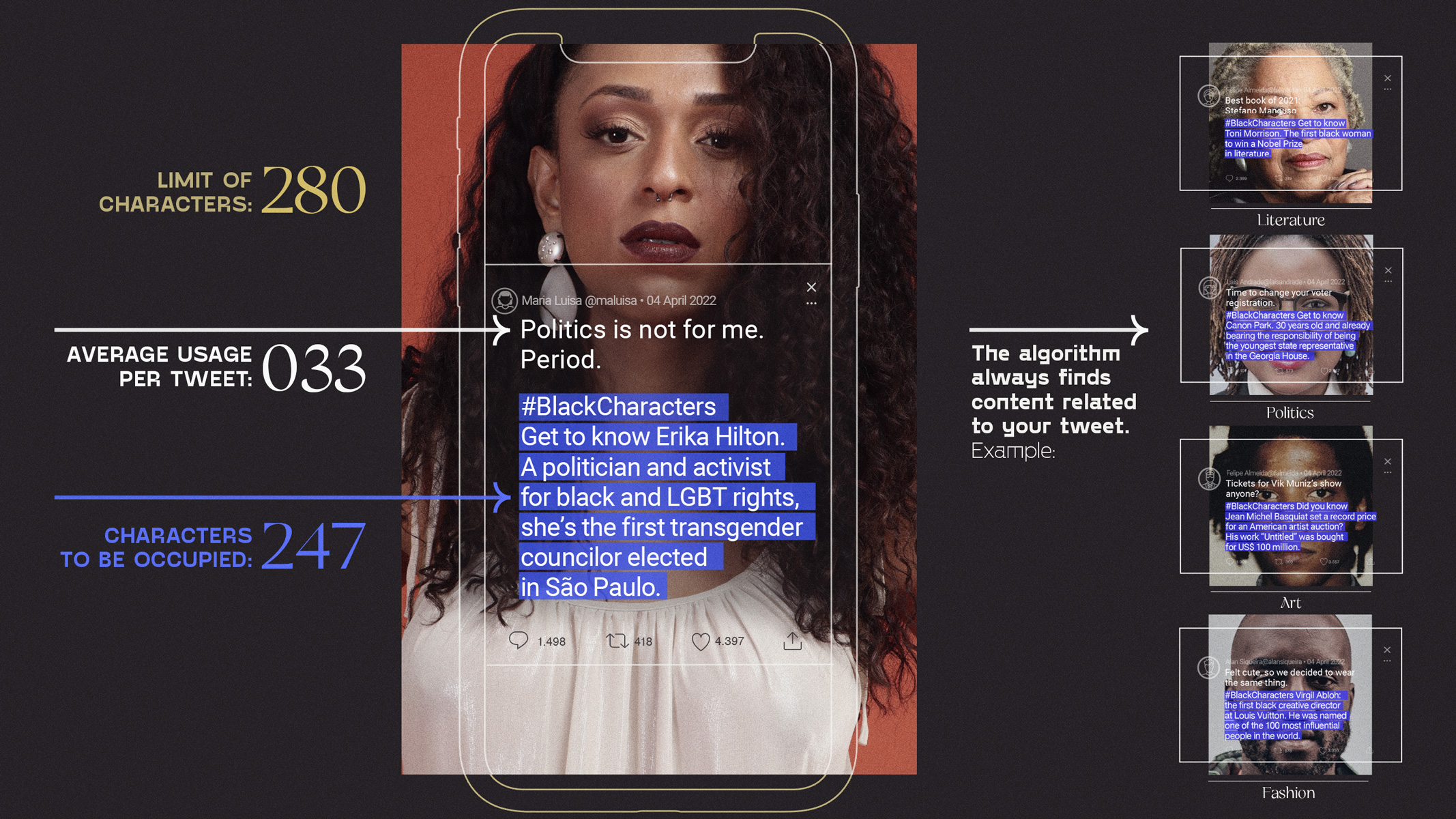 While more than half of the Brazilian population is Black, the country’s racial makeup is not reflected in its institutions. For example, 90% of its CEOs,84% of the journalists at its largest newspapers, and 82.2% of its deputies and senators are white.

As part of its 25th anniversary celebration, Raça Magazine is launching #VozPreta (“Black Characters”), raising awareness of, and speaking out against, the structural racism that regularly erases and silences Black voices and references in Brazilian society. #VozPreta went live on April 4, the anniversary of the assassination of iconic Black activist Martin Luther King Jr.

Developed by FCB Studio and FCB Brasil, the opt-in tool can be accessed at VozPreta.com.br or used directly on Twitter when users download the Chrome extension. The social network was selected based on its high levels of engagement among journalists, politicians and opinion-makers.

While Twitter allows for tweets of up to 280 characters, people tend to use an average of only 33. The idea of #VozPreta is to leverage that unused space by automatically filling the remaining character count with Black references. When someone starts typing a tweet, the tool recognizes the subject of the text and provides a Black cultural reference that automatically fills in the remaining space.

If someone tweets briefly about politics, for example, #VozPreta might respond with information about a leading Brazilian political figure like Erika Hilton. If someone tweets about the economy, it might fill in the remaining space by mentioning Lisiane Lemos, co-founder of the Black Professionals Network, which connects Black professionals to companies.

In a country where structural racism is so prevalent, #VozPreta is intended to help amplify the voices of Black intellectuals and professionals by covering a wide array of topics. The database is based on 25 years of articles published by Raça Magazine, and may be updated with new publications. It is dynamic and allows anyone from the Black community to include and suggest new content for use.

“Racism works by devaluing Black narratives, silencing stories that permeate the country’s political, social, and cultural foundations, and keeping these stories from being shared in an equalitarian basis,” says Maurício Pestana, one of Brazil’s leading Black activists.

“This doesn’t happen for lack of references, but a lack of space within public opinion,” he says. “And that’s why ‘Black Characters’ becomes even more relevant. We need to increase the visibility and mitigate the erasure that is forced upon the Black population.”

About Raça Magazine
Raça is the first and most acclaimed magazine in Brazil covering the afro culture. The publication is an editorial phenomenon: the first edition sold more than 270,000 copies, a record that still stands. To date, it remains the most efficient segmented vehicle for directly reaching the 54% of Brazilians that, according to the Brazilian Institute for Geography and Statistics (IBGE), are afro-descendents. We’re talking about 113 million people. Raça Magazine has been published for 25 years and is still making history through its leadership as the largest black culture magazine in Latin America. Raça discusses openly issues of racial inclusion and gender, subjects that are constantly trending, further benefiting and strengthening the representativeness of its readers. Proof of that is the fact that the magazine is once again breaking paradigms. Contrary to other publications, which are dealing with the crisis in the editorial market, Raça went from bi-monthly to monthly editions in 2019. The magazine’s leaders are also ready to transform the industry’s main challenge into a great opportunity, by integrating print and digital. This adaptation started in 2018 and will receive significantly more attention and investments this year. Throughout its history, Raça has enjoyed the support of presidents, ministers of state, business executives, intellectuals, academics, and hundreds of journalists. It was first released by Símbolo Publishers, then it went to Escala, and currently belongs to Pestana Arte & Publicações, a publishing house founded by Maurício Pestana, who is internationally recognized for producing educational materials broaching on diversity, citizenship, and human rights. revistaraca.com.br

About FCB Brazil
FCB Brasil is a Brazilian advertising agency. It is part of the international network Foote, Cone & Belding, which was the first advertising agency in the world and today is a member of the Interpublic Group (IPG). With a proprietary methodology for division of labor that is based on squads of people, FCB Brasil develops creative and cross-disciplinary projects that combine the speed of content and the strategic and creative craft of advertising. The agency is fully versed in using data and technology to insert brands into the local culture. It also has its own production company, FCB Studio, which was founded in 1973, is headquartered in São Paulo, and currently has 215 employees. Ricardo John is the CEO and CCO of FCB Brasil.