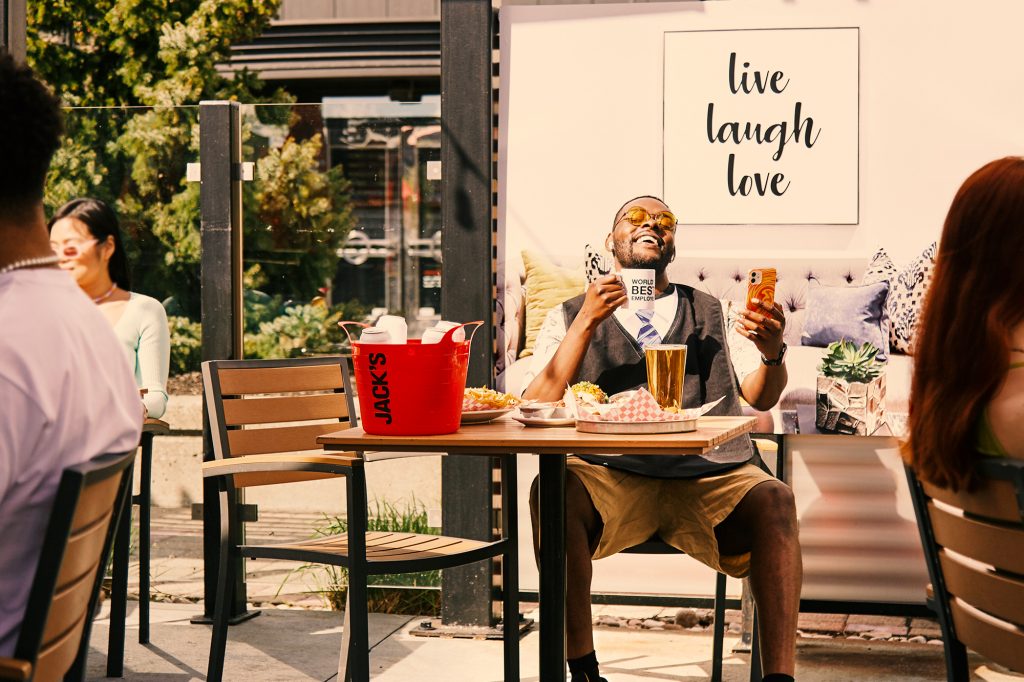 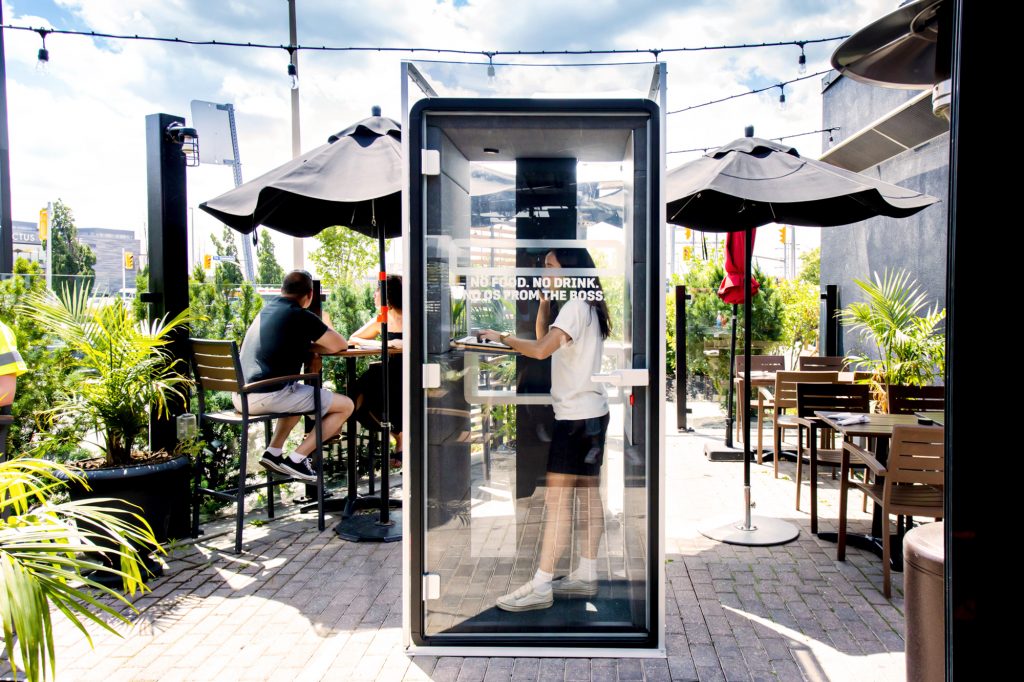 Canadians love a good patio hang. But the rise of work-from-home means that team lunches and after-work drinks have too often been replaced by sweatpants and leftovers.

As one of the country’s leading patio destinations, Jack Astor’s is encouraging people to enjoy the all-too-brief outdoor season at one of its restaurants with a summer ad campaign called “Work From Patio.” It lets people fool their boss into thinking they’re hard at work when they’re really only working up an appetite.

Partnering with The Garden, Jack’s created a series of social videos for TikTok and Instagram that show consumers pretending to be all over their work when they’re really working on a plate of nachos.

The ads are designed to drive viewers to their closest Jack’s to experience its new “Work From Patio” pod — a custom-built, soundproof booth, complete with a fake living room backdrop and “Best Employee” mug, everything they need to convincingly pull off a quick Zoom call between rounds of drinks.

“We’re known for our vibrant patios, but with the behavioural shifts we’ve seen post-pandemic, we needed a new way to invite Canadians onto our patios that better fit into their new daily routines,” said Anesie Johnson, VP Marketing, Sir Corp. “Not only is calling guests to “work” from patio a timely, culturally relevant move, it’s exactly the type of irreverent, tongue-in-cheek behaviour Jack’s is known for.”

Jack’s is sending the pod on a tour across Ontario and inviting people to tag their go-to Jack’s location on Instagram for a chance to have the pod show up at their local patio. They also installed custom “Work From Patio” backdrops at each of its 37 locations across the country, giving everyone a chance to fake out their boss while patio-ing like one too.

“Knowing that we needed a campaign that would feel fresh over the four months of patio season, we wanted to create a moving activation to give people that extra push to patio to check it out,” said The Garden’s creative director, Lindsay Eady. “Capitalizing on the popularity of soundproof work pods, we thought it would be unexpected and fun to bring one to Jack’s patios. People have been using it — whether it’s employees duping their boss or sometimes vice versa.”

The campaign is being supported by a series of headline-driven OOH, digital and social posts that mimic the video’s cheeky tone, reminding people that Jack’s is the perfect spot to slack off with their cameras on. 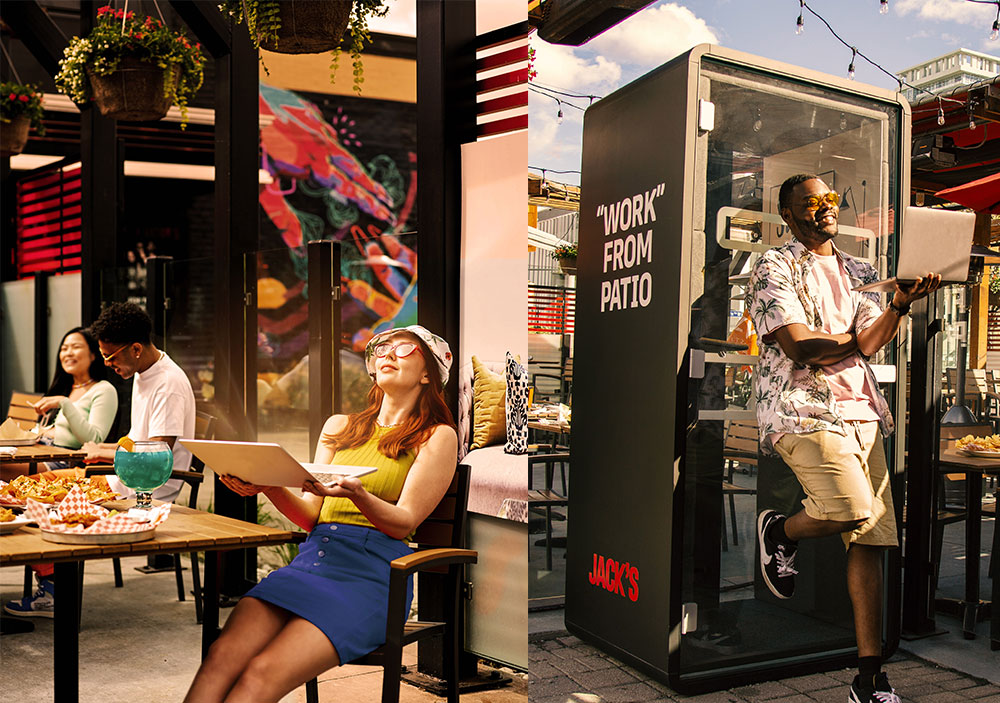 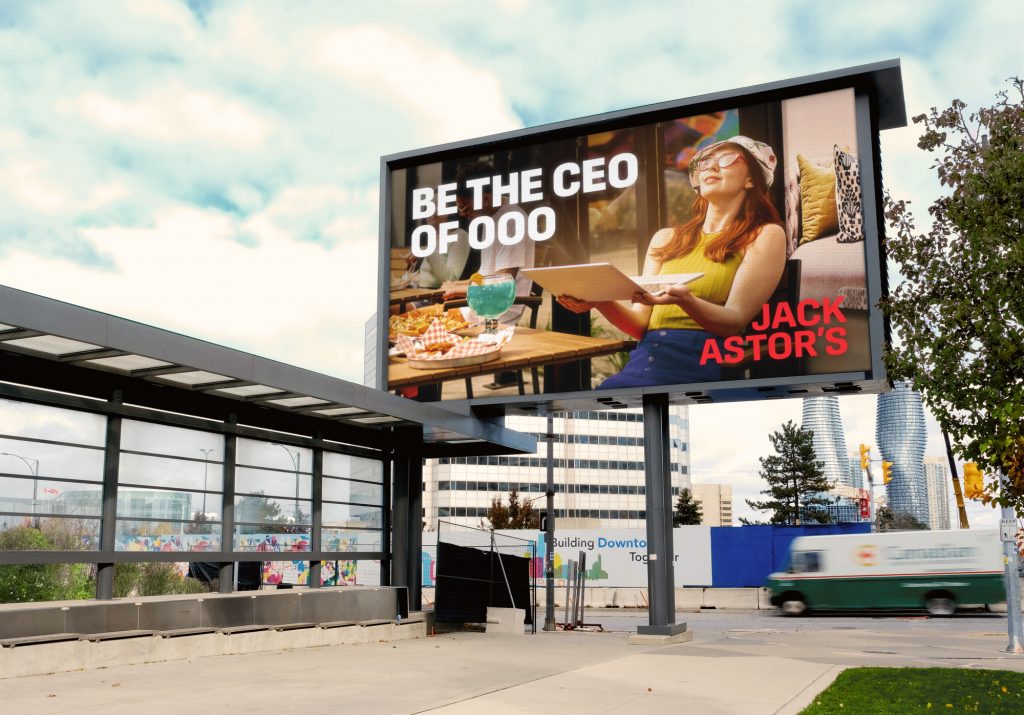 About SIR Corp.
SIR Corp. (“SIR”) is a privately held Canadian corporation that owns a portfolio of 53 restaurants in Canada. SIR’s Concept brands include: Jack Astor’s Bar and Grill®, with 37 locations; Scaddabush Italian Kitchen & Bar® with 10 locations. SIR also operates one-of-a-kind “Signature” brands including Reds® Wine Tavern, Reds® Square One, Reds® Kitchen + Wine Bar and The Loose Moose®. All trademarks related to the Concept and Signature brands noted above are used by SIR under a License and Royalty Agreement with SIR Royalty Limited Partnership. SIR also owns one Duke’s Refresher® & Bar location in downtown Toronto, and one seasonal Signature restaurant, Abbey’s Bakehouse®, which are currently not in consideration to be part of the Royalty Pool. For more information on SIR Corp. or the SIR Royalty Income Fund, please visit www.sircorp.com.