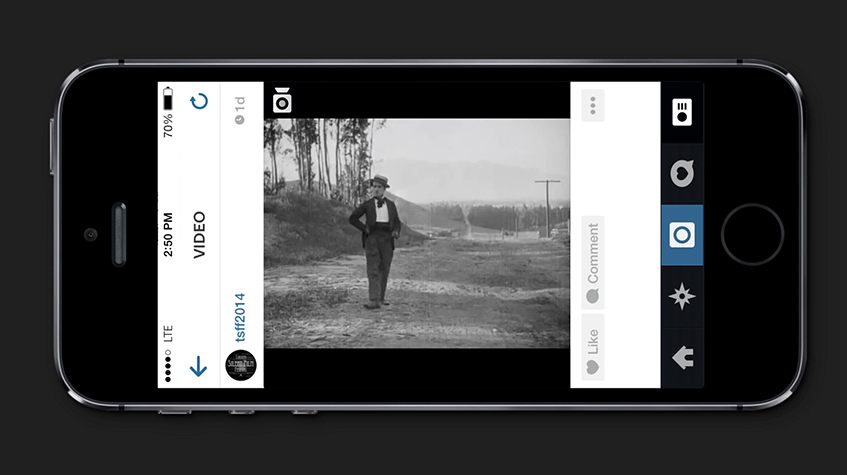 The Toronto Silent Film Festival and Cossette have partnered again this year with another old meets new campaign.

One of film’s most famous icons, Charlie Chaplin, celebrated a historic milestone on February 2nd – 100 years since he appeared in his first film – and fittingly it came and went without much noise. Chaplin, known for his roles in iconic silent films, is the theme for this year’s Toronto Silent Film Festival.

“Trying to be as innovative for the festival as last year wasn’t easy”, says Matthew Litzinger, Cossette’s Co-Chief Creative Officer. (viewable at @tsff_1, @tsff_2, @tsff_3)]. “Instagram is a medium that references the past in a lot of ways. We wanted to see just how far we could go with this idea.”

With that thought in mind, the festival has turned Instagram into a “time machine”. A series of linked images on the account (@TSFF2014) transforms the typically random clutter of Thumbnail Mode into a flowing, interactive timeline of one of film’s most recognizable figures, including facts and video clips.

“Throughout his life Chaplin had a knack for doing things no one else had seen in film. It made sense to try and do the same with a medium as relevant to 2014”, said Litzinger. “We knew we had a strong platform in Instagram, and wanted to find a unique way for fans to engage with it.”

The Toronto Silent Film Festival runs from April 3 to 8.
Chaplin’s acting debut was in Making a Living. The film premiered on February 2, 1914.