Are you fearless?
The Canadian Cancer Society Creates a Community of Fear Fighters

From spiders to heights, to singing in public, no fear is too big or too small to be included in the Fearless Challenge, a new online fundraiser for the Canadian Cancer Society.

The Fearless Challenge, an integrated campaign centred on a website at FearlessChallenge.com, created by advertising agency Lowe Roche, is daring anyone and everyone to confront their fears to help those living with cancer do the same. It’s an exciting new signature fundraiser from the Canadian Cancer Society, and a different way for the charity to frame the narrative around cancer.

The goal of the Fearless Challenge is to change perceptions around cancer by creating hope through fundraising that the disease will become more manageable in the future.

“The Canadian Cancer Society is committed to creating a world where no Canadian fears cancer, but we are not there yet,” says Mike Kirkpatrick, Director, Marketing for the Cancer Society in Ontario. “We know that more work needs to be done because a cancer diagnosis is still one of the scariest things a person can face.”

By pledging to confront their own fears, no matter how big or small, for a dollar amount they decide, Canadians can raise funds to help people living with cancer do the same. It’s a strategically pivotal and differentiating initiative that goes beyond the typical event-type effort to open up a new approach to fundraising.

Due in large part to donor-funded research, some cancers are becoming more manageable, but no less frightening. The good news is more people are surviving cancer than ever before. Today, over 60% of Canadians diagnosed with cancer will survive compared to about 25% in the 1940s when the Canadian Cancer Society began funding research.

“I think the Fearless Challenge is a new and exciting way to reframe the conversation around cancer,” says Mac. “It’s important that we look at fear, because it’s something that hasn’t really been touched upon before as a way of fundraising. Looking into the mind of a person who has faced their worst fear, ‘cancer’ is the most fearful terrible word out there, so I think it’s a new interesting way to re-examine things.”

A number of celebrities will also participate by facing their fears: Mike Bradwell, wide receiver for the Toronto Argonauts, will face his fear of heights by doing the CN tower walk; actor Natalie Brown, one of the stars of FX’s new series The Strain, will face her fear of swimming in a cold dark lake; actor Italia Ricci, star of the new TV series Chasing Life, will face her fear of giving up control while she sits as a passenger as her boyfriend, Robbie Amell, starring in CTV’s The Flash, drives a racecar; and actor Jonathan Keltz, of Reign and Entourage, will face his fear of spiders. See all their pledge videos below.

Participating in the Fearless Challenge is easy. All it takes is three simple steps:
1. Film a short video stating the fear you’d like to overcome and for how much,
2. Register at FearlessChallenge.com and ask your friends and family for donations and,
3. Once you’ve hit your fundraising goal, upload a video proving that you’ve faced your fear.

Lowe Roche partnered with their IPG sister agencies Lowe Profero and UM to develop the Fearless Challenge The fundraiser is being promoted through social media, by radio ads, wild postings, TTC and elevator screen ads, as well as pre-roll video and website banner ads. The wild postings are posted at the bottom of this page.

Money raised through the Fearless Challenge will fund more life-saving cancer research and help patients and their families through support services, ensuring that no one living with cancer has to face it alone. 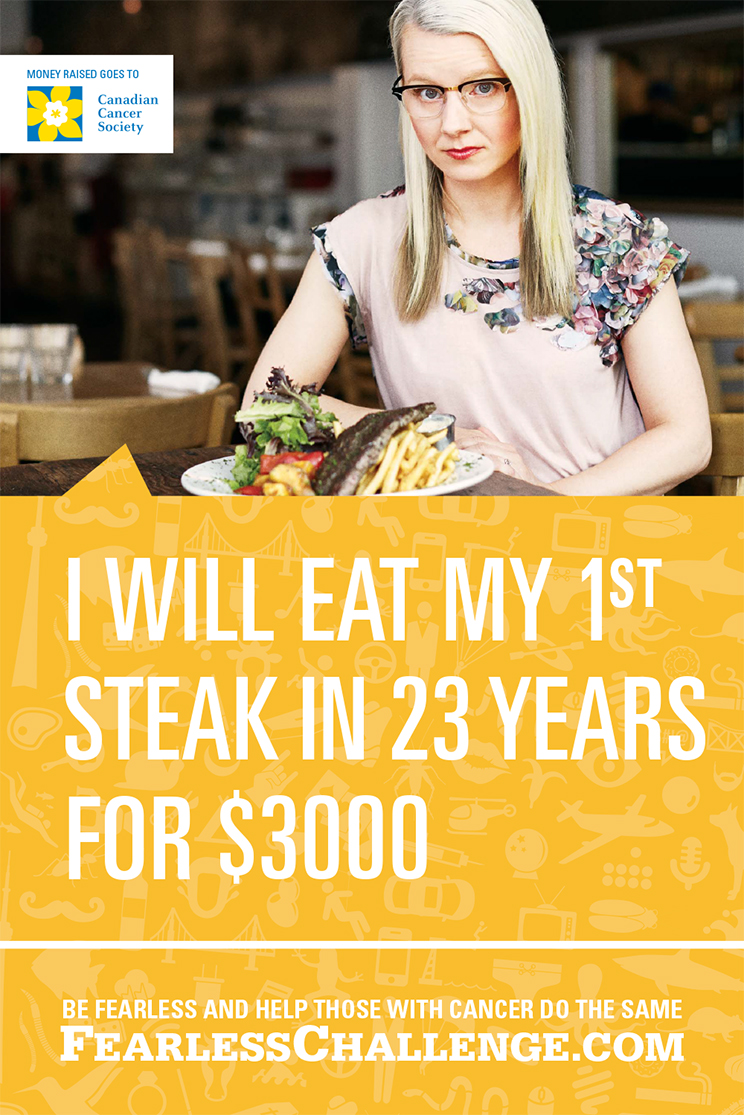 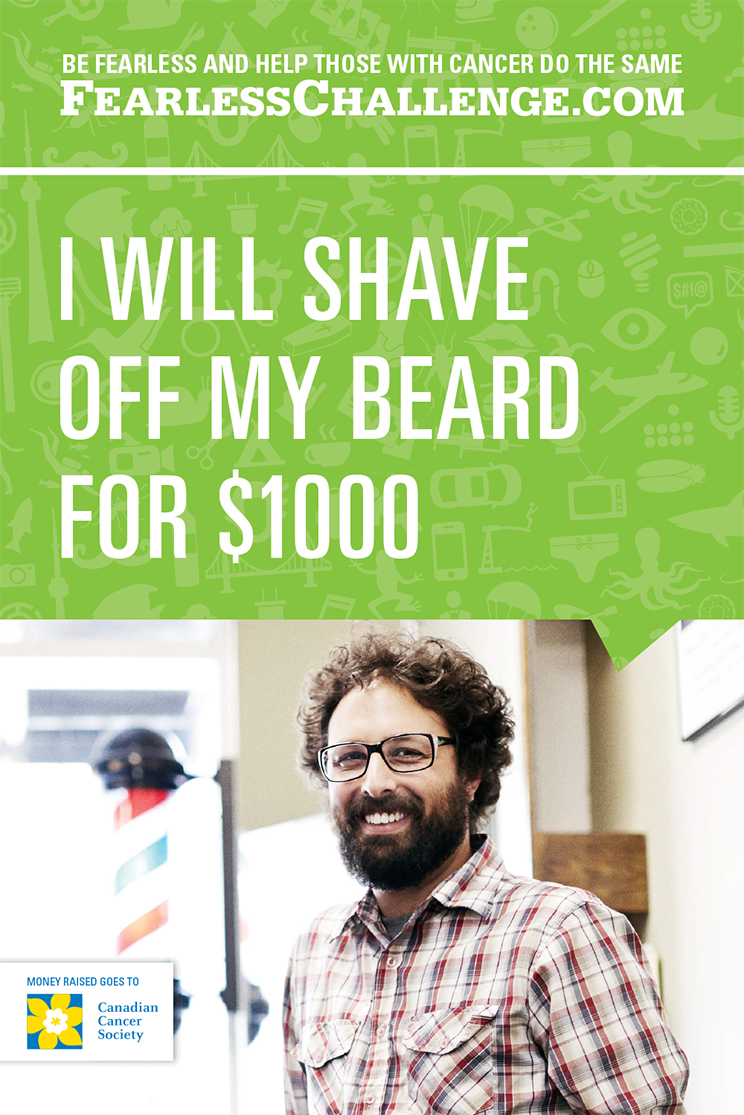 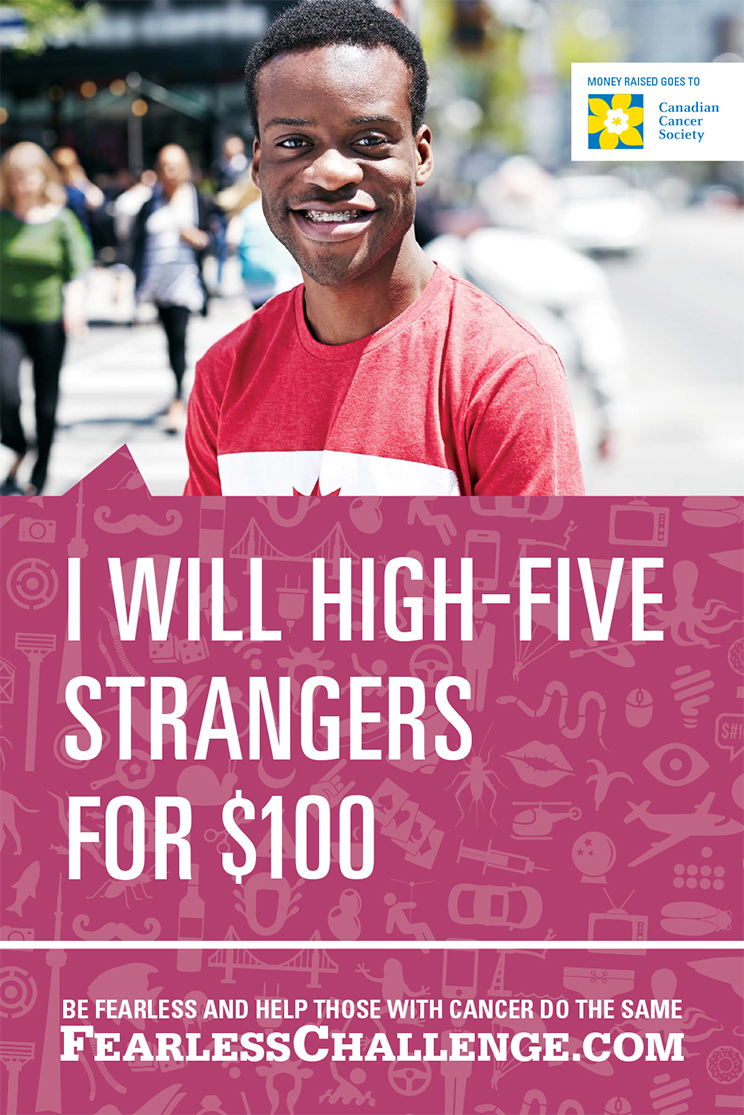 Music: “We Are the Brave” by Rebel Coast