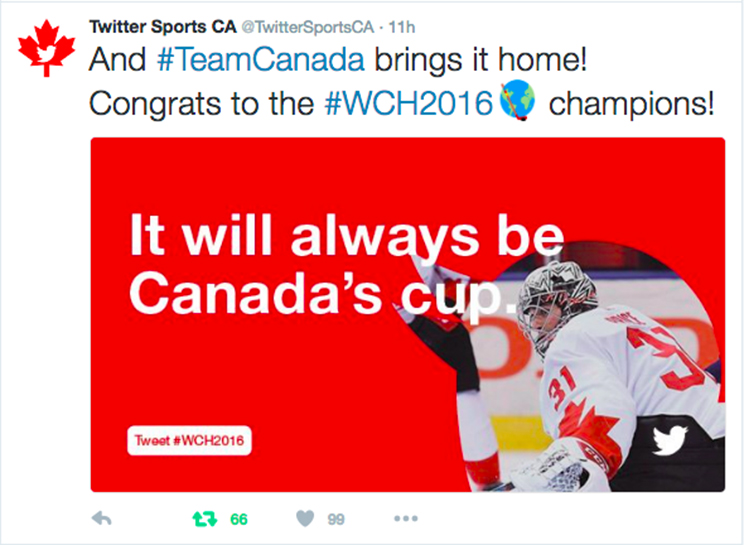 Creative agency Open and Twitter Canada partnered to execute a real-time marketing campaign for the World Cup of Hockey (WCH).

Laura Pearce, Twitter Canada’s newly appointed Head of Consumer Marketing, was only two weeks on the job when she recognized that Twitter needed to be active during the WCH. “As the platform connecting people with what’s happening in the world, and in their community, the World Cup of Hockey presented an ideal opportunity and challenge, especially given the tight timelines and the live aspect of the games. said Pearce.

Open was tasked with developing a tactical digital campaign targeted at sports enthusiasts and hockey fans both on and off of Twitter. In order to reach the right audiences in real time, with the most relevant ad messaging, a programmatic buy proved the most efficient way to reach the target. Emulating the Twitter experience, Open developed 70+ executions that were preloaded and available to run based on different real time triggers such as team match ups, game play, player highlights, wins and losses. In combination with a significant on-platform presence from Twitter Canada’s @TwitterSports account and their World Cup of Hockey partners plus real time updates via Moments, a recent feature that collects the best content on Twitter, the off-platform digital ads behaved like Tweets. This provided focused real-time content and driving fans to Twitter to follow the action and Tweet their commentary and support.

“We wanted the digital ads to be topical and immediate,” said Christian Mathieu, partner at Open. “We didn’t want to simply talk about the brand. We wanted the ads to behave like the brand”,

“The creative challenge was trying to anticipate the various scenarios so we could ensure that our content was as relevant as possible in the moment. “ added Martin Beauvais of Open.

The campaign launched Friday, September 23 in advance of the tournament semi-finals and ran through the final games between Canada and Team Europe. Media planning and buying was handled by Ron Christie of RCCI.

About Open:
Founded in Toronto by Christian Mathieu and Martin Beauvais, Open is
a creative company focusing on strategy, advertising and design. Open has done work for a broad range of clients including Evergreen, Smythe, Damiva, Food Basics, Toys“R”Us, Boulart and Cara. openacreativecompany.com

About Twitter:
Twitter, Inc. (NYSE:TWTR) is what’s happening in the world right now. From breaking news and entertainment to sports and politics, from big events to everyday interests. If it’s happening anywhere, it’s happening first on Twitter. Twitter is where the full story unfolds with all the live commentary and where live events come to life unlike anywhere else. Twitter is available in more than 40 languages around the world. The service can be accessed at Twitter.com, on a variety of mobile devices and via SMS. For more information, visit about.twitter.com or follow @twitter. 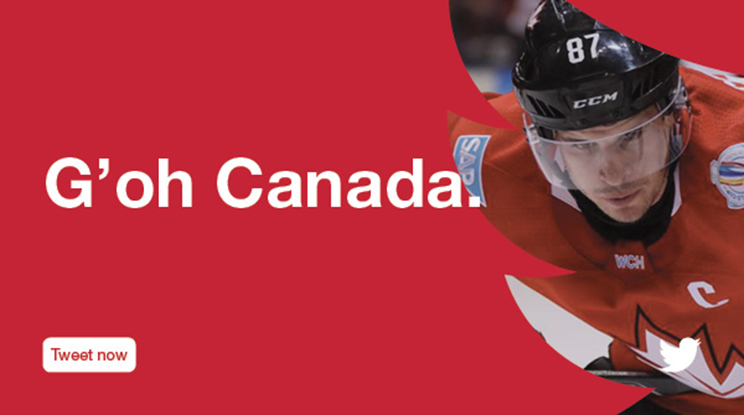 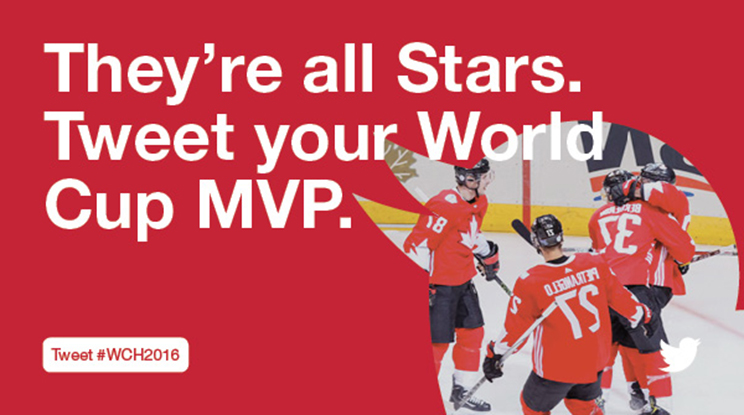 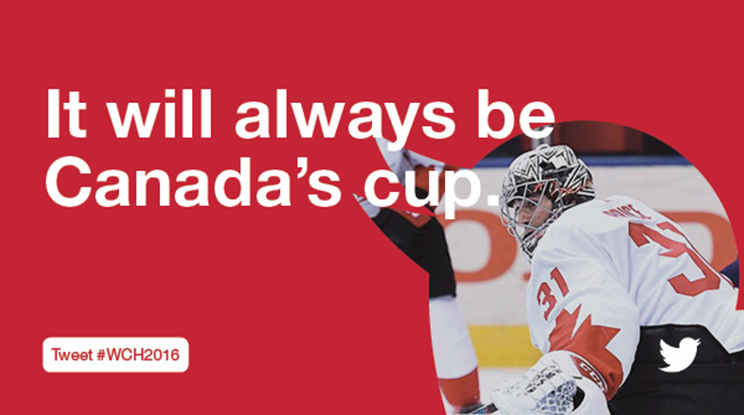 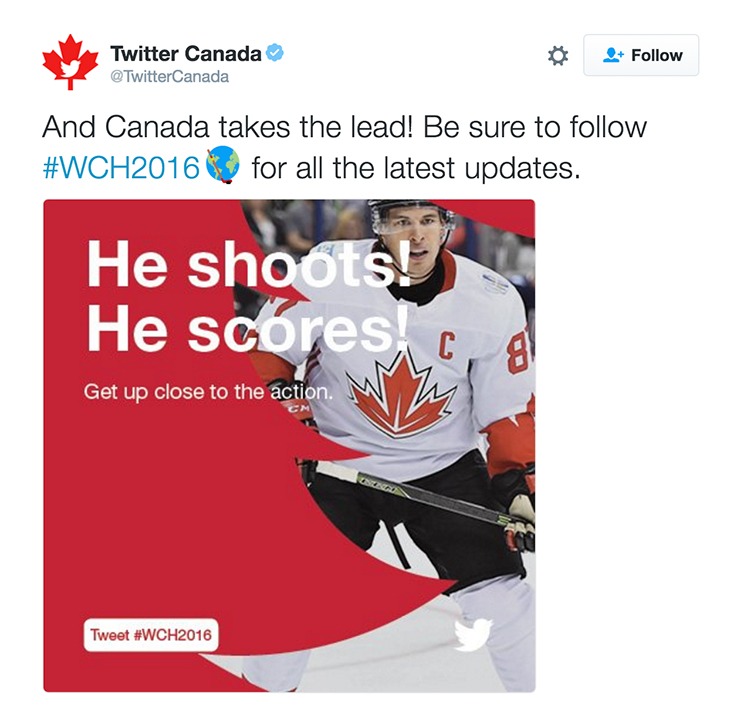 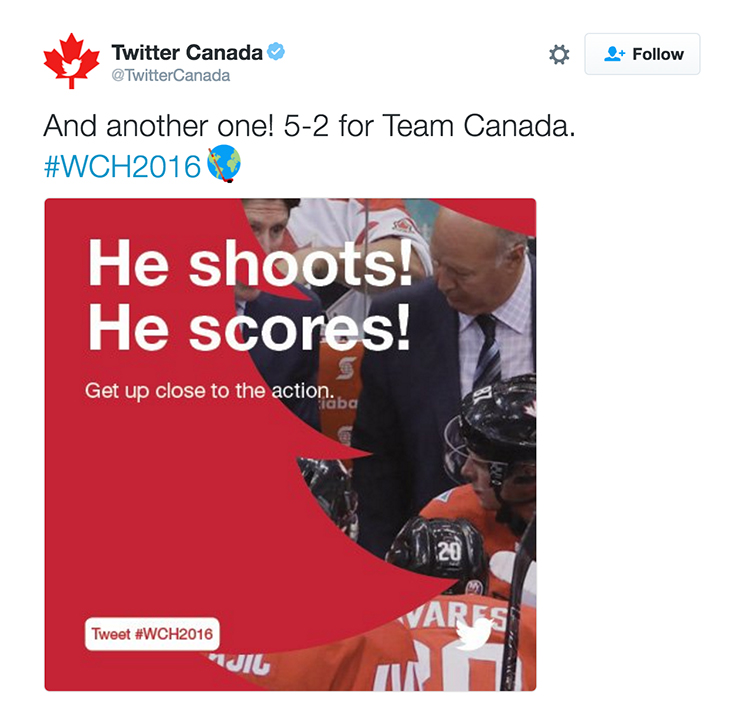