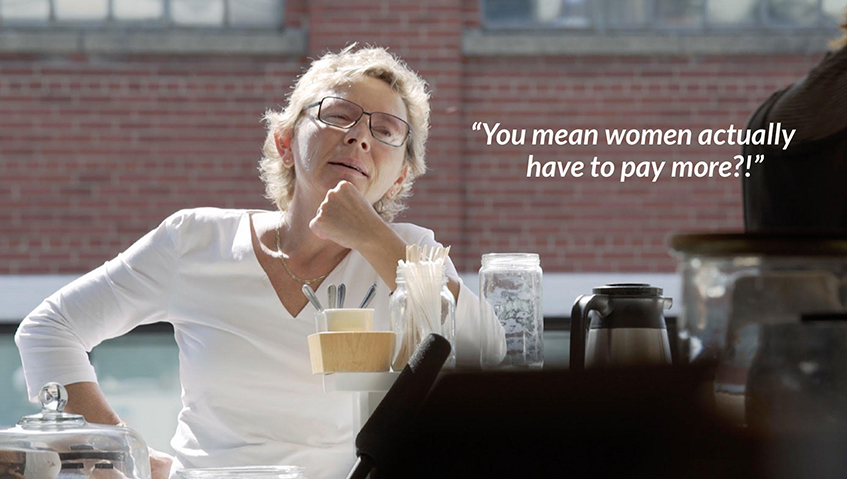 When it comes to equality, the ways in which men and women are treated differently often go unnoticed. It’s not until inequalities are brought into the open do people realize how unjust they are.

With a pair of recent projects, GIRLTALK HQ, a website dedicated to sharing daily news about global female empowerment topics, has sought to bring to light the everyday practices by people and company alike that undermine equality for women.

First, GIRLTALK HQ illuminated the Pink Tax – the fact that women pay on average 43 percent more for goods and services than men pay for comparable items. Working with BBDO Toronto, GIRLTALK HQ partnered with a Toronto coffee shop to starkly highlight such biased pricing policies by offering the same coffee at different prices for men and women. View the video above.

Following the stunt last fall, GIRLTALK HQ launched a petition asking Canadians to support a ban of the Pink Tax. With the goal of 2,000 supporters reached, GIRLTALK HQ presented a formal appeal to Prime Minister Justin Trudeau and the Minister of Status of Women, Patty Hajdu asking for the Pink Tax be banned, as you can see in the case study posted below.

Now, the organization is calling attention to the fact that men interrupt women three times more than they do other men with a new radio spot (below).

“Uninterrupted,” which was also created by BBDO Toronto, features a woman breathlessly relating all the ways in which women’s voices go unheard, like statistics citing that men dominate 75% of the conversation during business meetings and that patients interrupt female doctors twice as often.

“The idea of men interrupting women, or ‘manterrupting’, has been a topic of conversation for a while now. Studies about this date back as far as the early 1970s,” say Denise Rossetto, Chief Creative Officer at BBDO “It’s only been in recent years,that more and more people are speaking up about it and trying to address not just this issue, but the root causes behind it. Which is why it’s so crucial that places, platforms and experiences like GirlTalkHQ.com exists, and why messages like this one are necessary.”

About GIRLTALK HQ
Based in Los Angeles, GIRLTALK HQ prides itself on being the global headquarters for female empowerment. Launched in November 2012, the website regularly focuses on topic such as the body positive movement, feminism, social activism, politics, women breaking barriers, and the representation of women in media. Having previously worked with brands such as Vaseline, Coca-Cola, Moroccan Oil, Amazon, and the Science Channel among others, GIRLTALKHQ has become an online destination for partners who know they can count on content that is inspiring, empowering and positive. GIRLTALKHQ is fast-becoming a go-to destination for readers looking for a media site that is filling the need for authentic, intelligent and thought-provoking content which represents the current female empowerment movement.
GirlTalkHQ.com