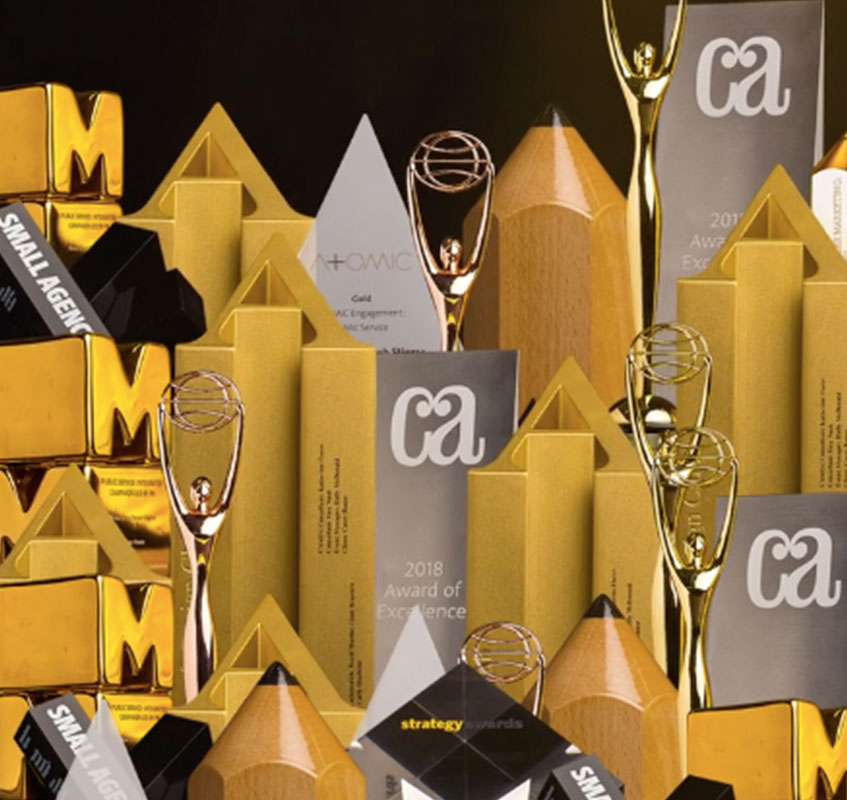 Toronto sister agencies Bensimon Byrne, Narrative and OneMethod are auctioning off the awards they won for Casey House and are giving the money back to the charity.

Every year, Toronto-based independent agency Bensimon Byrne and its divisions Narrative and OneMethod hold a holiday charity drive. This year they decided to go all in on Casey House, Canada’s first and only stand-alone hospital for people living with HIV/AIDS—not just doing their recent campaign pro-bono, but also trying to raise as much money for them as possible.

The agencies began their fundraising with an in-house holiday drive, which raised $20,000, but they wanted to do something bigger to raise additional funds for the chartable organization. So, they decided to auction off awards they’ve won for work on Casey House on Instagram.

Bensimon Byrne’s Glory for Good Auction. We’re selling awards we won for Casey House, to raise money for Casey House. DETAILS We’ll be posting awards on our Instagram that anyone can bid on. The person with the highest bid at the time the auction closes, wins. BIDDING Simply bid in the comments. TIEBREAKER We have something very special planned if two or more people are tied at the closing of bidding. WINNERS We’ll DM the winners about payment and pickup/delivery details. LIVE NOW The auction is live, so check out our other posts to see what we’re auctioning off right now. —————— @clioawards @d_and_ad @theoneclubforcreativity @adage @adweek

“We are really proud of the work we’ve done for Casey House and what it has achieved to help smash stigma around HIV,” says Joseph Bonnici, Partner and Executive Creative Director, Bensimon Byrne. “In the past year, the campaigns have been featured in over 1000 news stories, garnered two billion media impressions and won 75 awards. Although we love getting recognized for the work, we aren’t married to the trophies themselves. So, we thought, let’s auction the awards we won for Casey House to raise even more money for Casey House.”

The Instagram auction begins on Wednesday, December 12, on Bensimon Byrne’s Instagram account, with the big awards that are known globally – One Show Gold, Clio Gold, and a D&AD Pencil. From there they’ll auction off more Clios, another D&AD Pencil and then the big Canadian awards, taking it day-by-day based on response.

“It will be interesting to see who buys the awards,” says Bonnici. “It could be anyone from a generous client, who wants to support the hospital, to someone who worked on the campaign and wants a gold Clio or D&AD Pencil all for themselves. Frankly, we don’t care who ends up with them as long as we raise money.”

To promote the auction, they have created a video (posted above) – please note that the amounts spent on various shows listed in the video are totally tongue-in-cheek.

Over the past year, Bensimon Byrne and Narrative have won 75 awards for their work for Casey House. The awarded campaign is 2017’s June’s HIV+ Eatery, a pop-sup restaurant staffed by HIV+ chefs, and just last month they launched the follow-up Healing House, the world’s first HIV+ spa, staffed by HIV+ massage therapists.

The money raised will go towards creating personalized gift baskets for in-patients at Casey House. They all have individual needs to stay healthy and Bensimon Byrne wants to make sure they have everything they need for the holidays and beyond. The rest of the money will go to Casey House so they can continue to give the world’s best care when it comes to HIV and AIDS.

Hell yeah we spent a crapload of money on this gold Clio. But now we’re making things right. Help us support Casey House and bid on this award in the comments, or email Glory4good@bensimonbyrne.com before 4pm today. —————— @clioawards @d_and_ad @theoneclubforcreativity @adage @adweek