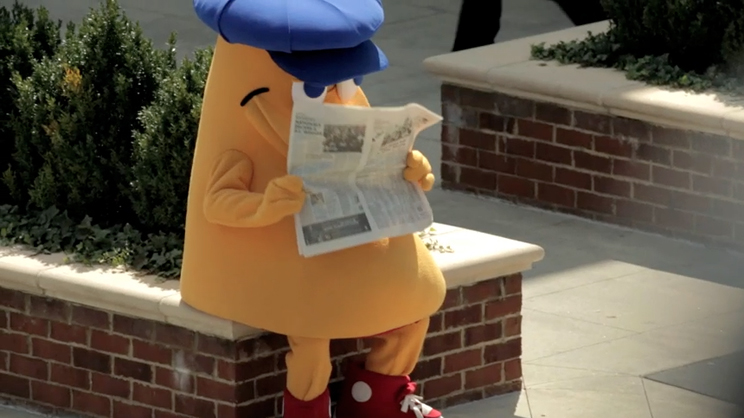 I love this campaign by Fitzgerald+CO, directed by Arts & Sciences‘ Adam & Dave, edited by Arcade‘s Greg Scrunton and finished by Airship Post. What’s not to love about a creepy mushroom mascot that stalks people? And they really did stalk real people.

Mellow Mushroom is a pizza place with a laid-back Hippie mentality and a rather stoned-looking mushroom for a mascot. As they grew to 130 stores in over 100 US cities, they wanted to get more followers on Twitter. So they made this campaign to tell people “if you follow us, we’ll follow you”. They neglected to mention they’d be doing it in real life. For real. In the company’s creepy mushroom costumes.

Adam & Dave at Arts & Sciences directed the hidden camera stalk-fest, following 20 real @mellowmushroom followers in a period of one week. By enlisting the followers’ friends and families as accomplices, “Mel” and “Dude” were in place and ready to trail them without their knowledge.

The promotion launched yesterday at FollowMellow.com, where visitors can watch the videos, follow Mellow Mushroom on Twitter, Facebook and Pinterest, and enter to win free pizza for a year. Over the course of the next month, local Mellow Mushroom stores will follow their new followers, surprising them with pizza and t-shirts.