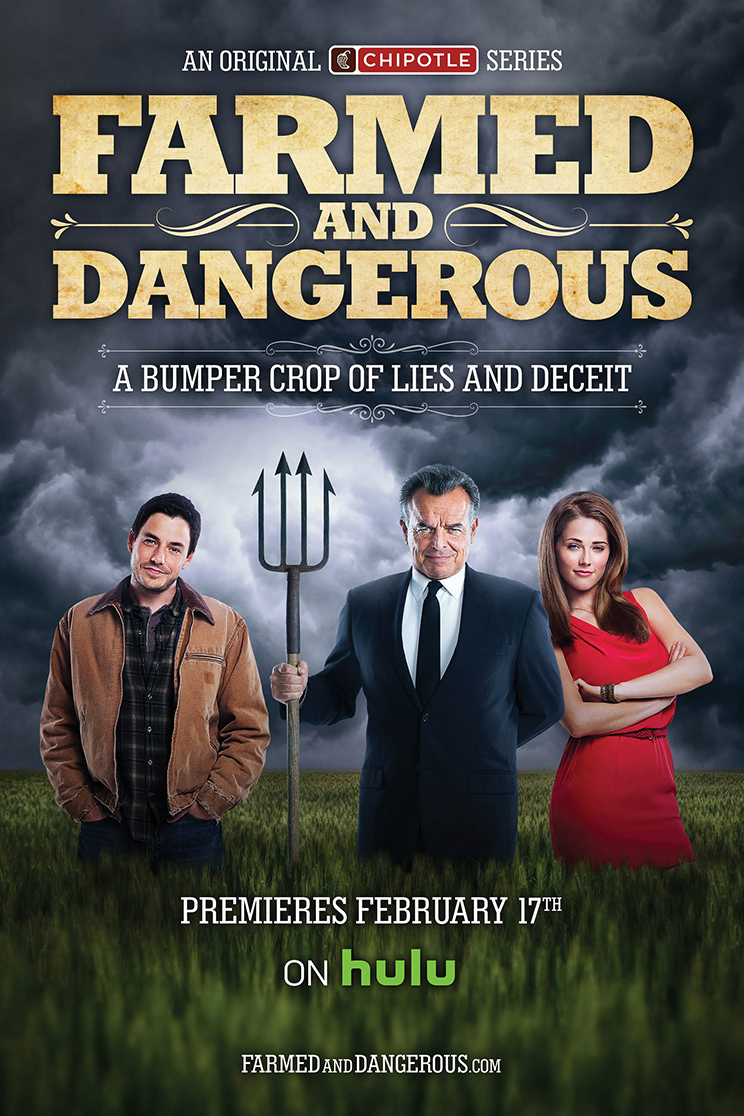 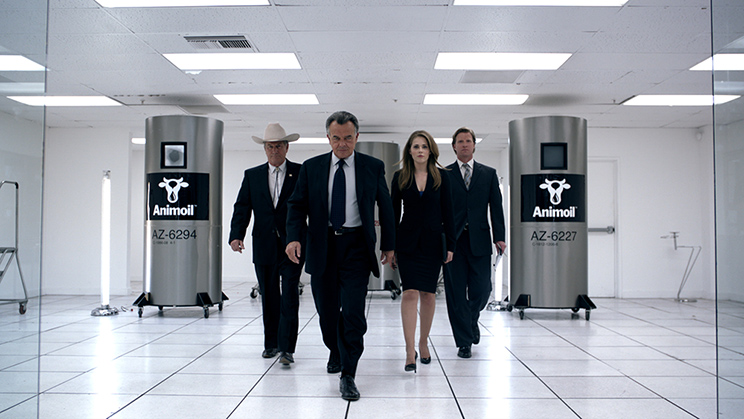 The series is produced by Chipotle and Piro, a New York- based studio headed up by Tim Piper, known for Dove Evolution who also directed the series, and Daniel Rosenberg, an executive producer who credits include Inside Man and Righteous Kill. The series trailer is posted above, and the initial four-episode season will be presented weekly on Hulu and Hulu Plus beginning Monday, Feb. 17, 2014. The show integrates Chipotle’s values and commitment to serving food made with the highest quality ingredients through the content and themes of the show itself, without any explicit Chipotle branding.

“Much of our marketing is aimed at making consumers more curious about where their food comes from and how it is prepared,” said Mark Crumpacker, chief marketing and development officer at Chipotle. “By making complex issues about food production more understandable — even entertaining — we are reaching people who have not typically been tuned into these types of issues.”

“Farmed and Dangerous” comes on the heels of two award-winning animated short films from Chipotle – 2013’s “Scarecrow” and 2011’s “Back to the Start” – both of which helped spark conversations about agriculture and industrial food production in entertaining ways. The initial season consists of four half-hour episodes, but the storyline is designed to be extended to additional seasons. The show stars Wise and Eric Pierpoint (“Parks and Recreation,” “Big Love”).

“Chipotle’s genuine mission to change the world of fast food is a great foundation for storytelling,” said Tim Piper, a partner at Piro and director of “Farmed and Dangerous.” “The characters and plot reflect Chipotle’s position on sustainable agriculture and enables Chipotle to communicate with more engagement than traditional advertising.”

Chipotle has a long-standing commitment to finding better, more sustainable sources for all of the ingredients it uses, including Responsibly Raised® meats (from animals that are raised in a humane way and without the use of antibiotics or added hormones), local and organically grown produce, and dairy products from pasture-raised dairy cattle. The company has also taken on the issue of genetically modified organisms (GMOs) in food, becoming the first national restaurant company to voluntarily disclose the use of GMOs in its food, and the first to announce plans to eliminate GMOs from the ingredients it uses.

“We think of ‘Farmed and Dangerous’ as a values-integration rather than typical product- integration,” said Crumpacker. “The show addresses issues that we think are important – albeit in a satirical way – without being explicitly about Chipotle. This approach allows us to produce content that communicates our values and entertains people at the same time.“

Piro partner, executive producer and co-creator of the show, Daniel Rosenberg added, “We hope the show inspires other brands to communicate through more strategic and entertaining creative that is really representative of who they are, and what they are doing to make a better world.”

The pilot episode of “Farmed and Dangerous” will be available for free on Hulu.com and via the Hulu Plus subscription service starting Feb. 17, 2014. Each additional episode will become available on the consecutive Mondays.

Additional information about “Farmed and Dangerous,” including full cast listing, is available at FarmedAndDangerous.com.

Steve Ells, founder, chairman and co-CEO, started Chipotle with the idea that food served fast did not have to be a typical fast food experience. Today, Chipotle continues to offer a focused menu of burritos, tacos, burrito bowls (a burrito without the tortilla) and salads made from fresh, high-quality raw ingredients, prepared using classic cooking methods and served in a distinctive atmosphere. Through our vision of Food With Integrity, Chipotle is seeking better food from using ingredients that are not only fresh, but that—where possible—are sustainably grown and Responsibly Raised® with respect for the animals, the land, and the farmers who produce the food. In order to achieve this vision, we focus on building a special people culture that is centered on creating teams of top performers empowered to achieve high standards. This people culture not only leads to a better dining experience for our customers, it also allows us to develop future leaders from within. Chipotle opened with a single restaurant in 1993 and currently operates more than 1,550 restaurants. For more information, visit Chipotle.com.

Piro creates, develops and produces original and branded entertainment across all media platforms. For brands, we develop and produce strategic creative for television, film, web series, digital, commercials, music and events in-house and produce original entertainment for major film studios and television networks. The principals behind Piro are Tim Piper and Daniel Rosenberg whose major award-winning work in advertising, film and television

make them uniquely qualified to help brands communicate their messaging through story and to unite advertising creatives and storytellers under one roof.