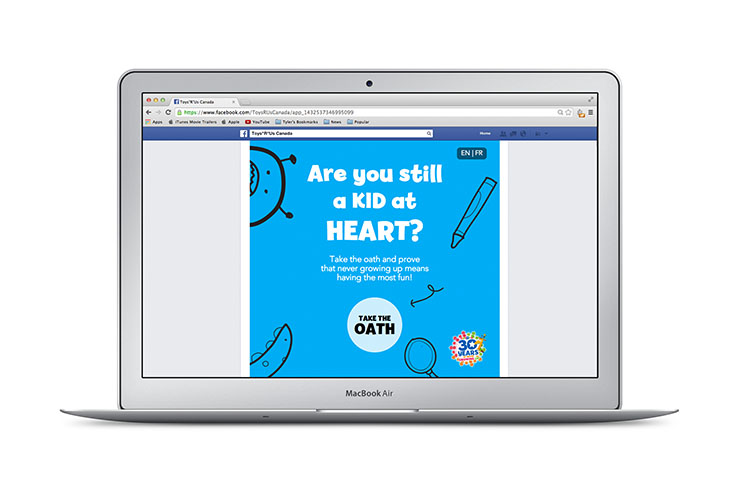 This year marks the 30th birthday of Toys”R”Us Canada. As the company matures into adulthood, what better time for the brand to pledge a promise to its supporters to remain forever young.

Toronto-based creative agency Open created a film dedicated to the young at heart, be they young, old, or somewhere in between. The message is a playful reminder to never grow up and a shout-out to those who stay playful by doing the things they love. A corresponding Facebook app, called “Never Grow Up”, was created to allow users to take the Toys“R”Us oath online. After submitting their own oaths of what they will always do to stay young, a map then shows their location, along with others, to create a cross Canada portrait of the young at heart.

“The film demonstrates the things that those who are young at heart promise to always do, from playing with bugs, to keeping a sense of wonder, to rolling down hills or firing off bottle rockets. The film has a sweet side, but focuses on the lightheartedness that is inherently Toys”R”Us.” Says Martin Beauvais, Partner, Creative, Open.

“The film is also a nod to the brands’ roots and the nostalgia associated with the jingle we all know,” adds Christian Mathieu, Partner, Strategy, Open.

Released in late September, the film will live online and drive to Toys”R”Us Canada’s Facebook app where users can take their own oath to never grow up.