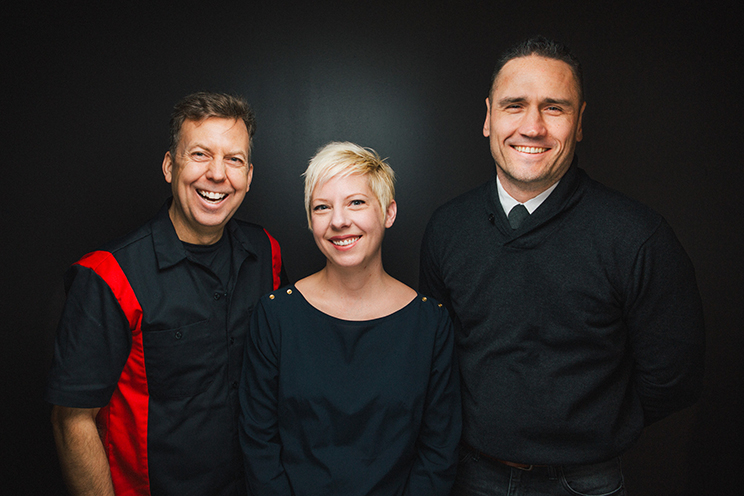 The three join Rain43 following twelve months of record expansion for the Corktown-based shop, including expanding its client roster significantly.

“These three talented individuals rose to the top of our search for many reasons, such as their leadership and mentorship skills, collaborative style, entrepreneurial spirit, and ability to think in an integrated fashion,” says John Yorke, Partner and President, Rain43. “As individuals, each of them have incredible experience and skills, but as a group – the creative brain power is exponential.”

The ECD’s were selected with assistance from cofounder and current Chief Creative Officer John Farquhar, following his decision to move on from Rain43 this coming fall.

“In 2010 we made up our minds to take the plunge and start a new kind of agency,” Yorke explains. “At Rain43’s inception, John had promised five years of his time. Six wonderful and frenetic years later, he has decided the time has come. John’s leadership, friendship, and creativity have been invaluable – he has been integral to the success of this agency. I can’t thank him enough for his contributions and partnership.”

“All of our newly minted ECD’s will have a working understanding of our clients,” says Managing Partner, Kevin Pfuhl, “However, each client will have the right combination of hand-picked leadership committed to their business. It’s a new collaborative model for our agency, one that will provide clients with both the intimacy of a boutique agency and the breadth of a large agency, increasing our ability to attentively assess needs and address them on a deeper level.”

Ultimately, the new model will also allow Rain43 to solidify its agency’s mission moving forward. The three will play an instrumental role in crafting Rain43’s new brand identity, and in recruiting the best creative talent to bring this mission to life.

Before joining Rain43, Murray served as Executive Creative Director at Lowe Roche. She’s worked at a number of notable agencies, including TBWA, TAXI, Maclaren McCann, Crispin Porter + Bogusky and Ogilvy & Mather. She’s worked on brands such as General Motors, Coca-Cola, Telus, Missing Kids, Nestle, RBC, Molson, and Mini, and her work has appeared in all the major award shows, including The One Show, the Cannes Lions International Festival of Creativity, and the D&AD Awards.

Stubbs arrived at Rain43 from his third tour of duty at MacLaren McCann, where he was Vice President, Group Creative Director. Prior to MacLaren, Stubbs was a partner at Teehan+Lax where he built their marketing group. He also enjoyed stints at San Francisco-based Organic, and Modem Media Poppe Tyson. He’s worked on a wide variety of brands, including BMW, Chevrolet, Cadillac, Jeep, Dodge, Chrysler, MasterCard, Wendy’s, TELUS, Sony Playstation, RBC, John Hancock, Quaker, and Frito-Lay. His work has been awarded with CLIOs, London International Awards, D&AD, Bessies, Effies, Cassies, CMA Awards, Applied Arts, and Webby Awards. In fact, one of his projects for Chevy earned a Guinness World Record.

Porter also arrived at Rain43 from McLaren McCann, where he too served as Group Creative Director. With experience at agencies including Teehan+Lax, Organic and Ogilvy Toronto, he’s worked on a great diversity of brands — including AIR MILES, BMW, SunChips, New Balance, Virgin Mobile, Buick, GMC, MasterCard, and Hewlett Packard — and his work has been awarded at the Cassies, the CLIOs, the D&AD Awards, The Advertising & Design Club of Canada, and the London International Awards.

Together, Rain43’s evolving leadership team will help the agency’s clients build their brands by delivering innovative work that performs. The trio’s first day at the shop was Monday, April 4, 2016.