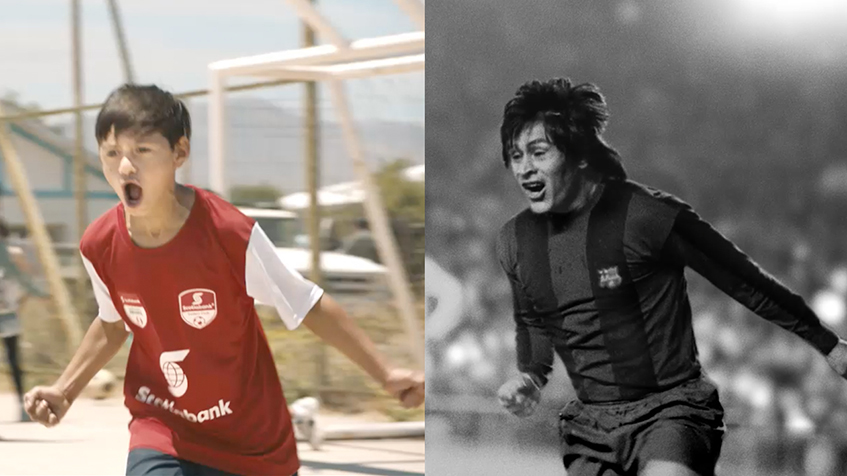 The latest from Toronto-based Bensimon Byrne celebrates Scotiabank’s sponsorship of the iconic FC Barcelona football team and their involvement in supporting thousands of youth football teams across Latin America.

No matter where a child grows up in Latin America, they dream of being their football hero and scoring that magical goal that puts them in the history books. “Futbol Dreams” campaign brings this to life by perfectly recreating four goals, from four iconic players of FC Barcelona – Hugo Sotil, Gerard Pique, Andres Iniesta and Lionel Messi – except using kids.

Football is a part of Latin American identity and has been for over a century. Scotiabank really wanted to give people in countries like Mexico, Chile, and Peru something that was stirring. After all, it’s football and FC Barcelona and that combination helps them feel incredibly connected to the game.

Whether you play on a rural farm and have humble beginnings or a big city and play in a city square, the dream of being an iconic player and scoring an iconic goal, is something people across Latin America can relate to.

This campaign has its roots in Canada with “Hockey Dreams“, which launched in September 2016. It was a campaign that generated an incredibly passionate response from Canadians. But the idea of children dreaming of one day being an iconic player crosses every border. So Scotiabank decided to take the idea that started in Canada, and as a global brand, bring it to life in countries across South America.

Scotiabank supports over 8000 community hockey teams across Canada, and thousands of football teams in countries like Mexico, Peru, Chile and the Caribbean. Thousands of Scotiabankers are involved at a grassroots level, volunteering any support they can, to grow the game and make sure every child has a chance to play sport.

“To make sure this was really authentic, we didn’t cast actors,” said Joseph Bonnici, ECD/Partner, Bensimon Byrne. “We cast little kids who were skilled players. You can’t fake the intensity in their eyes. We had an on-set football coach that ran the kids through the play again and again. The intensity on their faces is real. The most difficult part of the entire shoot was trying to choreograph 5 kids to land exactly where players are in that photograph. That was incredibly difficult. But to show you the passion of these kids, the had to play football all day and run through play after play. But in between takes, guess what they were doing in their downtime? Playing football.”